Grad Student to Appear on ‘Jeopardy!’ on March 12 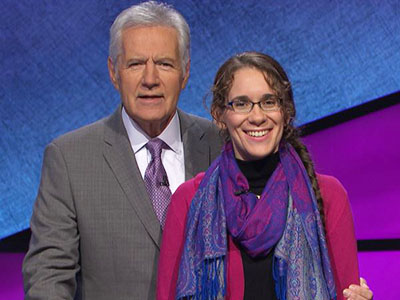 What started with a passion for trivia in high school (along with a couple of appearances on a local TV academic quiz show) has led to a moment Ashley O’Mara’s youth pastor knew would one day arrive.

“He told me that he wanted to take me on “Jeopardy!” because I knew the answer to his every question,” says O’Mara. “Even the non-religion ones.”

O’Mara, a Ph.D. candidate in English in the College of Arts and Sciences, says it started with taking an online test. She received an email from show producers this past summer.

“They invited me to audition in New York City in July,” says O’Mara. “Although I felt reasonably confident about my performance at the audition, I never once thought that I might get a call back to be a contestant in December!”

We asked Ashley to tell us how it all came together, and why show producers have put together a power point about a much-missed mustache.