“Gateway for America’s Veterans,” a video produced by the team in the University’s Office of Electronic Media Communications (EMC), has received an Emmy nomination from the New York Chapter of The National Association of Television Arts and Sciences (NATAS). 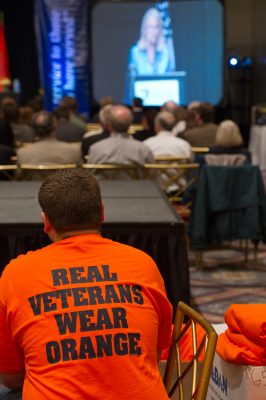 The video tells the story of Syracuse University’s historic commitment to generations of the nation’s veterans.

“We’re pleased that NATAS has recognized our team with this honor,” says EMC Executive Director and Producer Stu Lisson. “The New York chapter is the most competitive in the nation, with affiliates from all of the major networks taking part.”

The video tells the story of Syracuse University’s historic commitment to generations of the nation’s veterans. Created in partnership with the University’s Office of Veteran and Military Affairs (OVMA), the 10-minute production helps further the University’s outreach and advance its mission of assisting veterans in pursuing their education after separating from military service both academically and personally.

“With its longstanding commitment to veterans, Syracuse University continues to be uniquely positioned to educate and empower this generation of veterans, military-connected students and family members and positively impact the future leaders of our nation through higher education,” says Ron Novack, OVMA executive director. “So we are proud of the recognition for the video that is such a valuable tool, helping us tell our story and reinforce our commitment to being the ‘best place for veterans’.”

Between 1945 and 1950, the Servicemen’s Readjustment Act of 1944, commonly known as the GI Bill, supported some 2.3 million students nationwide. Few universities in the country were more closely identified with the GI Bill than Syracuse University. Chancellor William Tolley promised servicemen and women there would be places waiting for them at the University when they returned, and enrollment more than tripled in the years immediately after the war. Syracuse then ranked first in New York State and 17th in the country in veteran enrollment and today, the University ranks continually in the Top Ten. Syracuse University continues to remain deeply committed to the military, veterans and family members and this video captures the outstanding support military-connected students receive while attending the university. It also gives veterans an opportunity to “tell their story” about transitioning from military to campus life.

Producer Meg Lynch adds, “It was a privilege to help tell Syracuse and OVMA’s remarkable story and document the inspiring comments from the program’s veterans.”

This is the sixth consecutive year that the EMC team has received an Emmy nomination for production excellence.