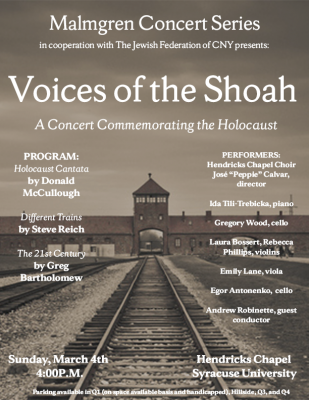 Students and faculty from the Setnor School of Music will present music to commemorate the Holocaust at Hendricks Chapel on Sunday, March 4, at 4 p.m. The concert, titled “Voices of Shoah,” is the final concert of the 2017-18 Malmgren Concert Series. The program is made possible with additional support from the Philip L. Holstein Community Program Fund of the Jewish Federation of CNY.

The concert features contemporary music that reflects on the Jewish experience during WWII, as well as 21st-century responses to genocide. Steve Reich’s “Different Trains” for string quartet and prerecorded tape explores the composer’s experience growing up riding trains across the United States and the realization that he would have had to ride very different trains had he been born in Europe. Donald McCullough’s “Holocaust Cantata” for choir, soloists, piano, cello and narrators gives voice to the Polish Jews’ experience, alternating music based on traditional Polish songs with prisoners’ stories from the archives at the U.S. Holocaust Memorial Museum. The program will conclude with Greg Bartholomew’s work for SATB choir, “The 21st Century: A Girl Born in Afghanistan,” a setting of the speech former UN Secretary-General Kofi Annan made upon receiving the Nobel Peace Prize in 2001.

José “Peppie” Calvar, director of the Hendricks Chapel Choir, designed the program concept. He writes, “Donald McCullough’s ‘Holocaust Cantata’ is a piece that has always been on my ‘bucket list’ to perform as a conductor. The text is poignant and profound, and the music is so haunting. The marriage of the ‘Holocaust Cantata’ and ‘The 21st Century: A Girl Born in Afghanistan’ by Greg Bartholomew seems odd at first. With texts from Kofi Annan’s Nobel Peace Prize acceptance speech, the choir sings, ‘We can love what we are without hating what we are not, without hating who we are not.’ The two pieces remind us of the bonds that unite humanity despite our ethnic, cultural and spiritual differences, and of the timelessness of this unity.”

The concert highlights the talents of Setnor School of Music students and provides the opportunity for them to collaborate with faculty. The Hendricks Chapel Choir will be joined by cello professor Gregory Wood and piano professor Ida Tili-Trebicka. String professor Laura Bossert leads a quartet of string students in Steve Reich’s “Different Trains,” and Andrew Robinette, assistant professor of music at South Dakota State University will be guest conductor for “The 21st Century.”

The concert is free and accessible. Parking is in the Q1 (on space-available basis and handicapped), Hillside, Q3 and Q4 lots.