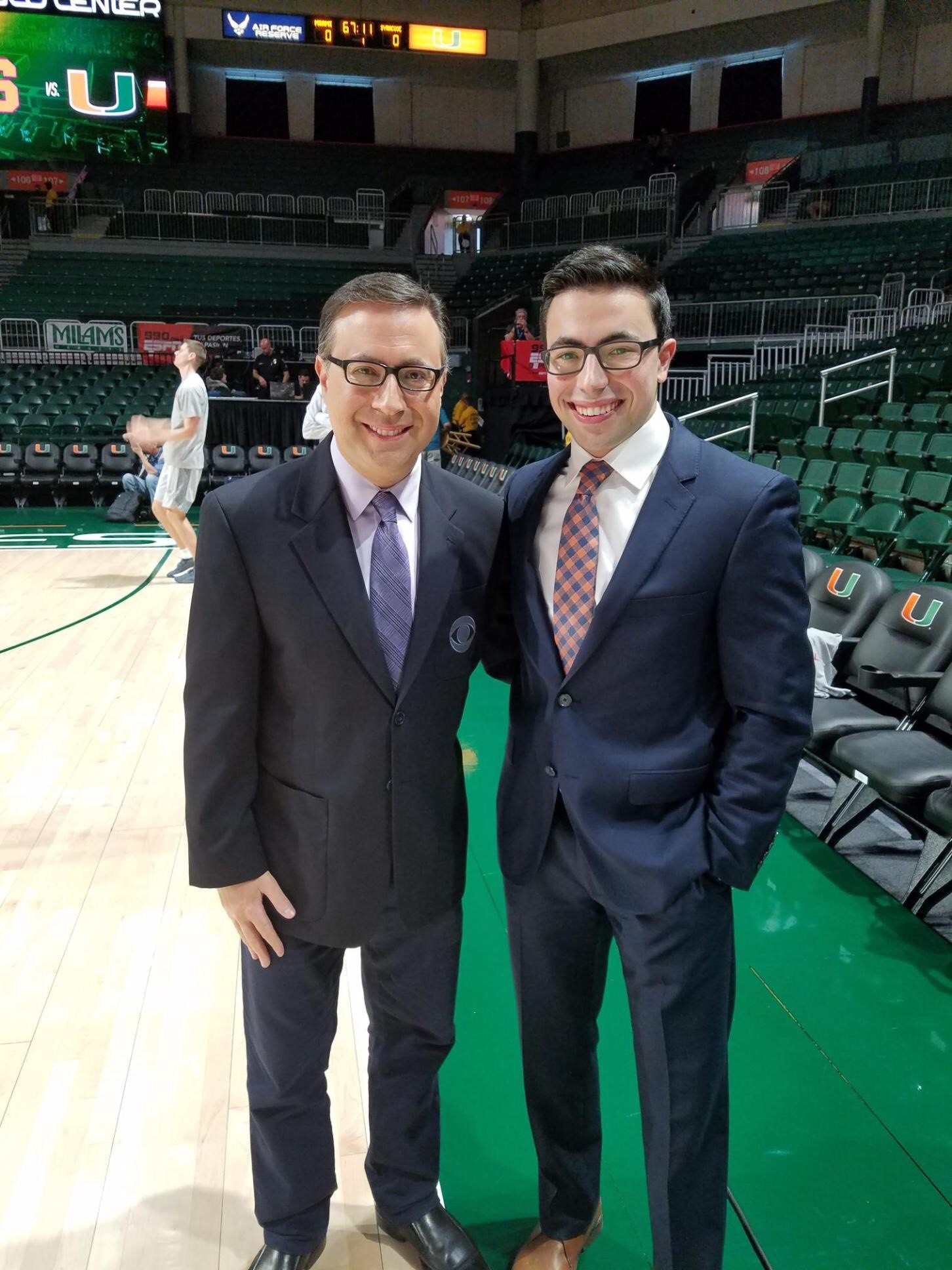 Ian Eagle ’90 and Noah Eagle ’19 pose for photo before the SU-Miami game, which they both broadcast for their respective outlets.

A moment truly steeped in Orange played out in front of a network TV audience recently, one which gave a well-known father and his soon-to-be well-known son a moment they’ll always treasure.

It happened last weekend, when the Syracuse University men’s basketball team traveled to Miami to play the Hurricanes. Broadcasting the game as part of the WAER sports team was Noah Eagle ’19. Calling the game for CBS Sports was his dad Ian Eagle ’90, one of the top play-by-play announcers in the country. As one might imagine, it was a memorable day not only for both men, but for viewers and listeners too.

“It was a bit surreal seeing Noah in the seat that I occupied 28 years ago at SU,” says proud dad Ian, who during the game was situated about 50 feet away from Noah’s broadcast location (or about the distance of a half court shot). “Sharing notes before the game, talking about the match up and riding over to the arena together set the tone for a day we’ll always remember. Once the game started it was business as usual but every now and then I would look over just to take in the moment and smile with pride. ”

“Before the game I was living in the moment and taking in the fact that this was a reality,” says equally proud son Noah. “I knew this could be the only chance I had at doing the same game as my dad and I wanted to make the most of it. By the time tip-off came, I refocused on the task at hand—calling a good, clean game.”

The moment wasn’t lost on CBS.

Network producers “had a photo montage prepared. They then took me and my broadcast partner (Sam Rubinoff ’18) on screen and used the WAER feed during the broadcast for about two minutes. We also did an online/social media hit in which I interviewed my father in a light, fun manner,” Noah says. “All of it was surreal. I figured there would be some coverage, but didn’t imagine it would be at that magnitude.”

The common thread, other than DNA, is WAER and Syracuse University.

“Noah chose Syracuse because of its incredible broadcasting legacy,” says Ian, whose daughter Erin is a freshman studying public communication as well. “I always hoped Noah would follow my path at WAER and take advantage of the fantastic opportunities the station presents. But I also knew it would take a unique set of circumstances for us to call the same game. Honestly it surpassed my expectations and I’m grateful that we got to share this special experience together.”

Ian says he hears his broadcast style in Noah, and is excited to see where the journey into the broadcast industry takes him. “The reality is that every broadcaster has to develop their own style. My advice to Noah is the same advice that I give to any aspiring broadcaster, the essence of ‘you’ that must come through in order to truly connect with the audience,” Ian says. “It doesn’t happen overnight, it takes years of hard work and repetition to polish those skills.”

One might argue it’s the same formula that led to the a memorable day for the Eagle family, father and son alike.