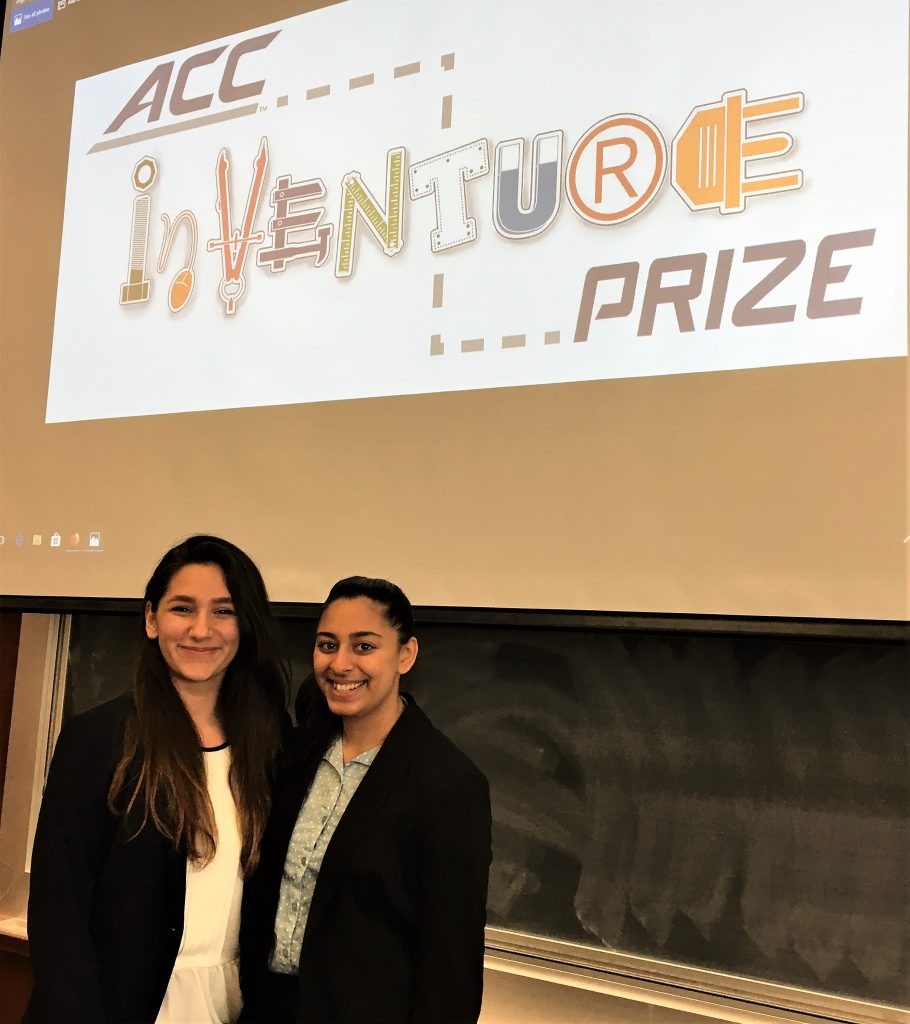 Elizabeth Tarangelo ’19 and Kayla Simon ’19 will represent Syracuse University at the Atlantic Coast Conference (ACC) InVenture Prize Competition on April 5-6 at the Georgia Institute of Technology.

They were selected top team from a slate of “elite eight” finalists in a campus qualifier held on Feb. 16, coordinated by the Blackstone LaunchPad at Syracuse University. The teams pitched novel ideas for products, services, and technologies to a panel of judges with expertise in law, finance, marketing, design, product development and social enterprise.

Tarangelo and Simon, College of Engineering and Computer Science (ECS) majors, are the co-founders of In-Spire, a patent-pending bracelet that can work as a wearable asthma inhaler. The team was the first place winner at the 2017 Invent@SU competition in New York City, and also won the 2017 Impact Prize Competition, sponsored by the LaunchPad as part of Syracuse University Libraries. They developed their prototype at the Invent@SU invention accelerator this past summer and worked on their path to commercialization this academic year.

The ACC’s 15 member universities come together once a year for the ACC InVenture Prize, with top student innovators competing “Shark Tank”-style before a live audience and panel of expert judges at an ACC campus.  At that April event in Atlanta, the top ACC team will win $15,000, the second-place team will receive $10,000, and $5,000 will go to the fan favorite, based on live texting during the PBS-televised show. Five finalists will be selected in a semi-final round April 5 to compete in the televised finals on April 6.

The eight finalists for the recent Syracuse University campus qualifier were:

“The ACC InVenture Prize competition is a chance to showcase innovation by Syracuse University students at the national level,” says Vice Chancellor and Provost Michele Wheatly. “Congratulations to the In-Spire team who will proudly represent Syracuse at the finals, as well as to all the students who participated. Syracuse University is gaining recognition for the number of students engaged in innovation and entrepreneurship, and their success at the state and national level.”

“I’m delighted that the Blackstone LaunchPad at SU Libraries coordinated this campuswide competition and provided extensive coaching and mentoring to the competitors,” says Dean of Libraries and University Librarian David Seaman. “We are very impressed by the strong and diverse slate of innovations that were developed by Syracuse University students.”

“We are incredibly proud of Kayla, Elizabeth and all of the students who participated in the ACC InVenture Prize competition,” says Dean of Engineering and Computer Science Teresa Abi-Nader Dahlberg. “It is particularly exciting to see students who completed the Invent@SU invention accelerator program continue to be recognized as innovators. The skills they developed in Invent@SU—to design, prototype, and pitch a novel device—were on full display in this competition. I encourage all students to follow their example and take advantage of the resources offered by the Blackstone LaunchPad, Invent@SU, and the entire entrepreneurial ecosystem at SU.”