On Wednesday, Feb. 14, Vice Chancellor of Strategic Initiatives and Innovation, Executive Director of the Institute for Veterans and Military Families (IVMF) and Barnes Professor of Entrepreneurship Mike Haynie testified before the U.S. Senate Committee on Armed Services on the subject of military family readiness, specifically addressing the Senate Armed Services Subcommittee on Personnel on issues impacting military children and spouses. Vice Chancellor Haynie was invited to testify by the Chairman of the Subcommittee, U.S. Senator from North Carolina Thom Tillis, and by the ranking member, U.S. Senator Kirsten Gillibrand from New York. 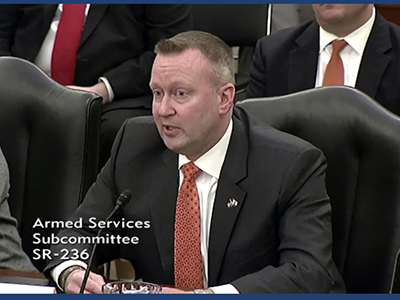 Haynie’s expert testimony focused on the issues and challenges facing military families as they transition back into civilian life. Among the subjects Haynie addressed were the exceedingly high rate of unemployment experienced by military spouses, the financial readiness of military families and the adequacy of consumer protections for services members and their families, along with the well-being of children who have grown up in military families throughout the post-9/11 period.

In his prepared testimony, Haynie said providing support to “service members, veterans and families who have shouldered the burden of our past and current wars is not about patriotism or politics.” Rather, he said, this emphasis “acknowledges the greatest fear of the architects of the post-Vietnam all-volunteer force; that is, a circumstance where the Department of Defense is unable to recruit and retain citizen volunteers. In this regard, at no time in the history of the all-volunteer force have the costs and consequence of inaction [related to supporting military families] been more profound.”

Haynie cited recent data showing that since the advent of the all-volunteer force, the pool of Americans who meet the minimum standards to volunteer has consistently declined. Today, he said, “it is estimated nearly three out of every four of the roughly 34 million 17- to 24-year-olds in the U.S. are ineligible to serve. Thus, while our nation’s defense rests on the assumption of a broad and deep pool of eligible volunteers, the reality is that this assumption has never been more tenuous.”

Haynie spoke of the work Syracuse’s IVMF has done during the past five years to inform and act on opportunities to advance in-service and post-service opportunities for service members, veterans and military families. Over that period, Haynie said, more than 90,000 have benefited from educational, vocational and business ownership programs offered by the IVMF and its partners.

“Importantly, the large scale and scope of the IVMF’s programs has set the conditions for extensive study of the in-service and transition-connected challenges facing our service members and their families,” he said. “I look forward to sharing some of what we have learned regarding the topics the Committee identified as the focus of this hearing during our discussion.

Concluding his testimony, Haynie said, “it is clear to me that investments positioned to care for and support our military families, to include a robust infrastructure supporting the transition of military families to civilian life, represents an investment in the nation’s future defense. Further, such investments are also morally and ethically right. These are complex issues, but exceedingly important.”

Video of the committee hearing can be accessed here.