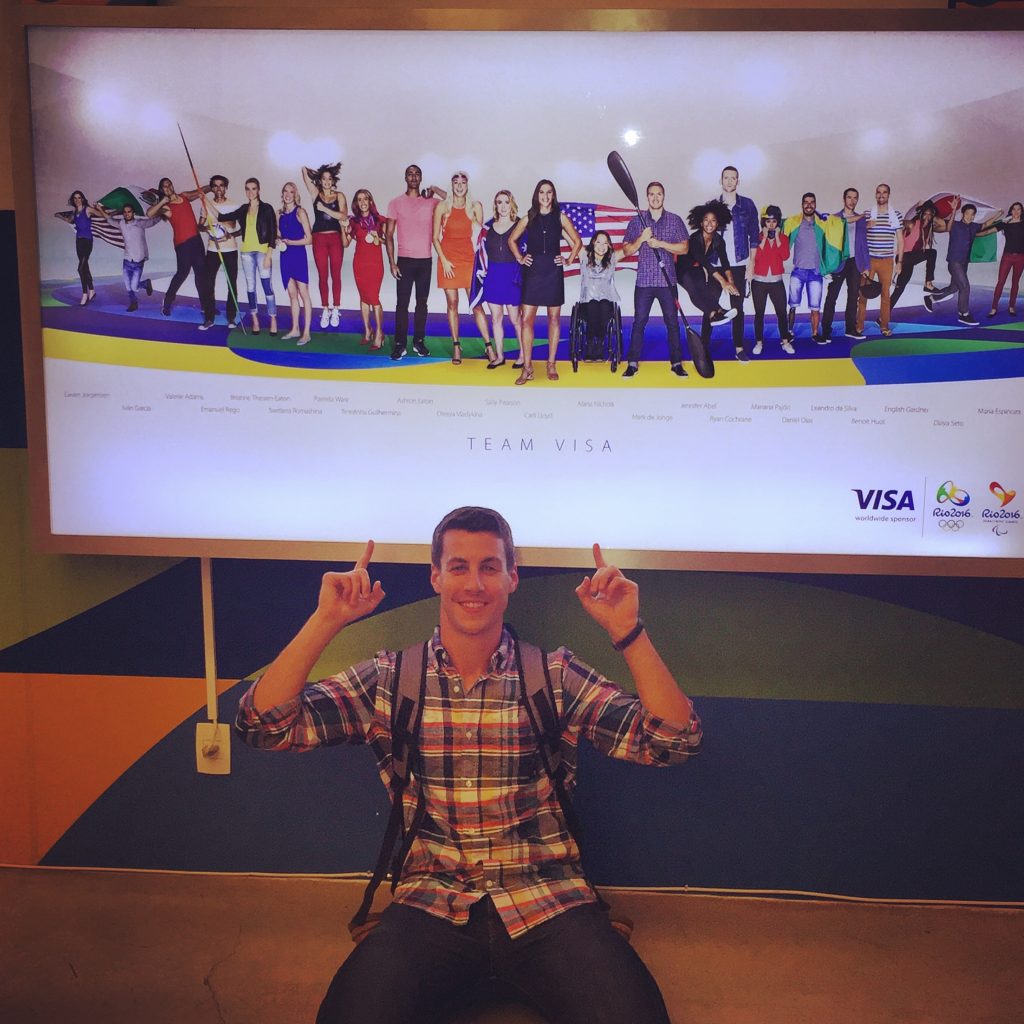 Brian Meyer ’11 works with the Visa Olympic Sponsorship team, managing the 54 Olympic and Paralympic athletes for the 2018 Olympics who Visa sponsors and their media and marketing appearances in South Korea.

At the Olympics in PyeongChang, Brian Meyer ’11 is cheering on a roster of international athletes.

Meyer, an account manager with Endeavor (formerly WME|IMG), works with the Visa Olympic Sponsorship team, managing the 54 Olympic and Paralympic athletes for the 2018 Olympics who Visa sponsors and their media and marketing appearances in South Korea.

“Team Visa” is made up of athletes from around the globe, including Mikaela Shiffrin of the United States, alpine skiing; Chloe Kim of the U.S., snowboard—halfpipe (who won a gold medal today); Jamie Anderson, of the U.S., snowboard-slopestyle and big air (who won a gold medal Monday); Mark McMorris of Canada, snowboard—halfpipe and big air (who won a bronze medal Sunday); Sara Takanashi of Japan, ski jumping (who won a bronze medal Monday); Kamil Stoch of Poland, ski jumping; Oksana Masters of the U.S., para cross-country skiing/biathlon; Scott Moir and Tessa Virtue of Canada, figure skating-ice dancing (who won a team gold medal Sunday); and the Nigerian women’s bobsled team. Since 2000, Visa has provided support to a selected group of international athletes each Olympics to help them as they pursue their goals.

“Olympians and Paralympians work just as hard—if not harder—than some of the more visible athletes when you compare them to players with the NFL, NBA, etc., but they often don’t get the recognition or fame as interest in their sports peak every four years,” Meyer says. “In that way, they have a tendency to be more approachable and relatable. The humility that you find in a lot of these athletes is contagious and you can’t help but root for them.” 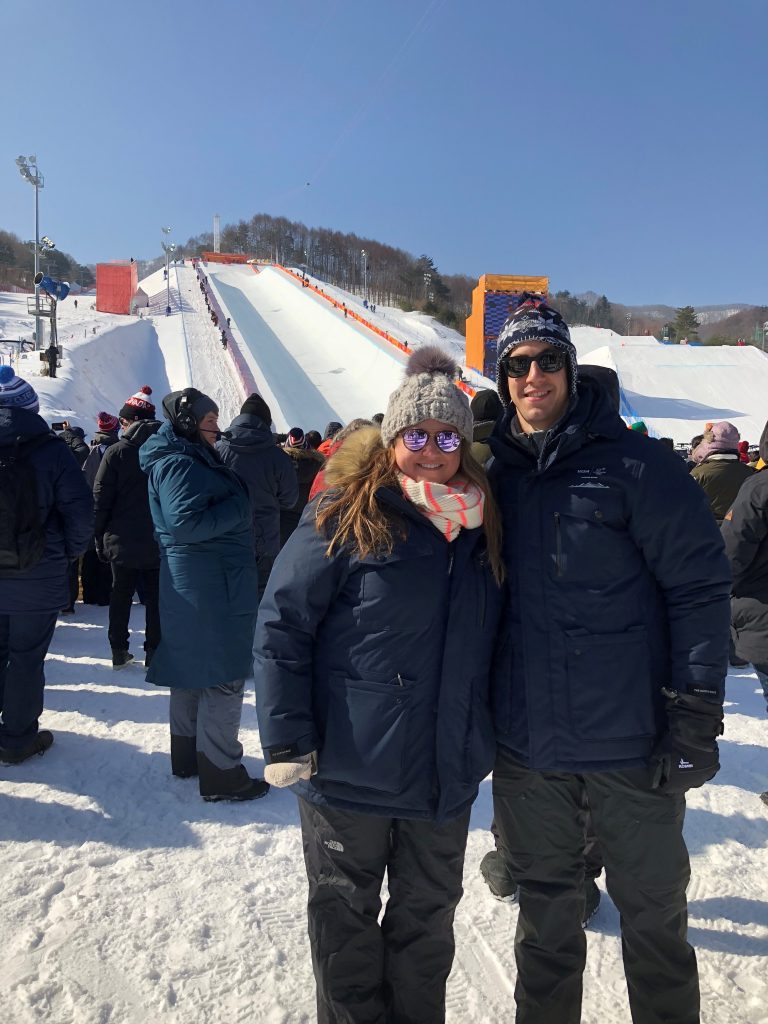 Brian Meyer ’11, at right, with a friend at the halfpipe run at the Olympics in PyeongChang, South Korea, today when snowboarder Chloe Kim won the gold medal

Their appearances can range from press conferences to marketing stunts to autograph signings. “It’s a huge undertaking from the full team to get these appearances coordinated and done on the ground,” says Meyer, a graduate of the sport management program in Falk College. “Pre-games, I served as the lead on all things athlete-related for Visa. This included research and recommendation of talent, contract negotiation and day-to-day relationship management with the athletes.”

Meyer is with the athletes through the work they do with Visa, but he also connects with them and their journeys, through their ups and downs.

“After working with some of them for the better part of three years—some longer in my past roles, I’ve developed a connection with them and it goes both ways; when they succeed it’s great, and when they don’t it really sucks,” he says.

While at Syracuse, his studies in sport management helped him build toward his professional life. “SPM prepared me by allowing—and encouraging—me to do a lot of learning outside of the classroom as well as in it,” Meyer says. He was involved in the Sport Management Club and its Charity Auction, and Syracuse Steiner Sports Collectibles, and interned each summer during college.

“I took my capstone as seriously as I would a full-time job, and that helped me to parlay it into a full-time job,” he says. “I also took part in the inaugural Olympic Odyssey class and trip [which explores the ancient and modern games and includes a trip to visit Olympic cities], and that really helped solidify my passion for global sport and the Olympic movement, and actually has helped to open some doors for me within the Olympic world.” 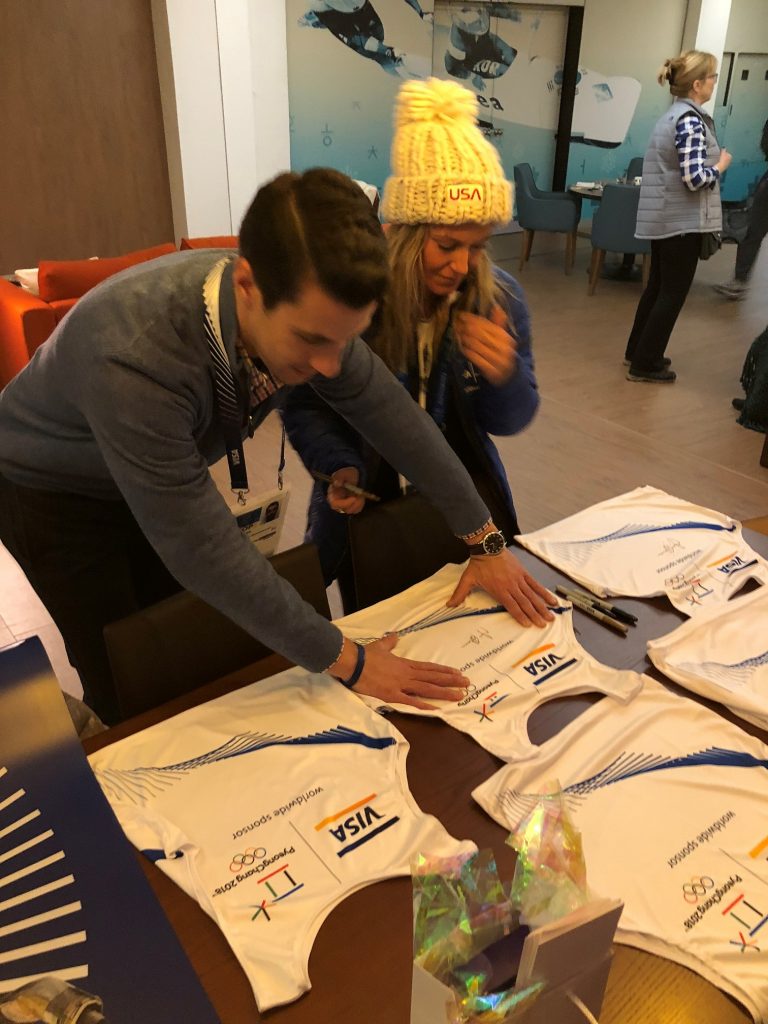 Throughout his career, Meyer has mostly worked in client services. “Finding the balance between ‘the client is always right’ and getting your viewpoints across can be a fine art,” he says. “It’s rewarding to see things that you’ve worked on, such as an advertising campaign, come to life, and seeing athletes you work with succeed.”

Although he worked on the Sochi 2014 Olympic Games, this is his first time at the winter games. Meyer has attended the Olympics in London in 2012 and Rio in 2016. “I’m really excited to see our athletes perform and show the world what they’ve got. I’ve also never been to Asia, so I’m excited to experience the culture, eat the food and meet the people,” he says.

Although he’s busy working with Team Visa, Meyer hopes to get in some time seeing some of the excitement of the games.

What’s his favorite winter Olympic sport to cheer on?

“I got sucked into bobsled in 2014; it’s honestly addicting when you understand it!” Meyer says. “This year, I’m going hard on the freeski/snowboard events, and alpine skiing.”