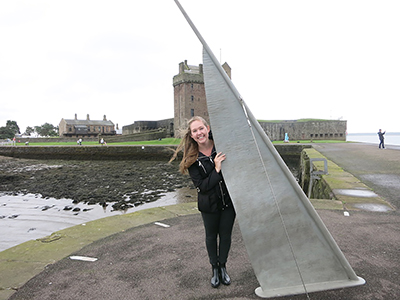 Hannah Butler at a castle in Scotland as part of her Fulbright UK Summer Institute experience.

Newhouse senior Hannah Butler spent the summer of 2016 as a student cultural ambassador through the U.S.-U.K. Fulbright Commission’s UK Summer Institute program. A public relations major with minors in English and marketing, she participated in the Fulbright-Scotland Summer Institute.

The  Fulbright U.K. Summer Institutes are fully funded three- to four-week summer study programs for first- and second-year U.S. undergraduates. For 2018, the program is offering nine institutes, each focused on different disciplines and issues, at universities across the U.K. The Summer Institutes are made possible through generous donations from private individuals and through partnership with some of the top U.K. universities. Participants are selected on the basis of leadership skills, academic achievement, character, adaptability and ambassadorial qualities, as well as demonstrated interest in the U.K. and its culture. Selection is highly competitive.

Butler was the first SU student to receive a Fulbright U.K. Summer Institute award, which funded five weeks of study in Scotland with an emphasis on the country’s history, culture and technological advances. She calls the journey a life-changing one, rich with such experiences as attending lectures on Scottish architecture and forensics, exploring abbeys and castles, and being an honored guest at the Glasgow City Chambers. “Everything I did—the tours I went on, the archives I saw, the people I met—I could not have done just traveling by myself,” Butler says. “I loved it!”

At Durham University, Schaf practiced archaeological excavation techniques, took part in pottery and ceramic analysis, examined skeletal remains dating from 537 A.D. and visited culturally and historically significant sites in England and Scotland. “In our last two weeks, when we were studying 5th- to 11th-century Northumbrian history, it was interesting to think about the individuals whose history was missing,” says Schaf, a College of Arts and Sciences junior majoring in forensic science, writing and rhetoric, and anthropology (Maxwell School). “You hear about the monarchy, and you hear about the individuals in the church. But I wanted to hear about the women. I wanted to know about enslaved individuals. I wanted to know about everyday life and everyday people and how they made the city of Durham run—not just the people in power.” 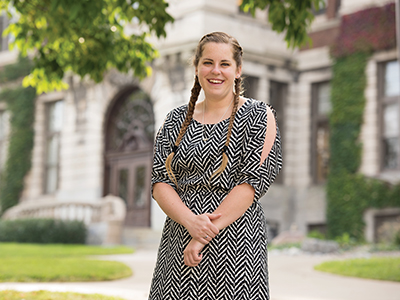 Both Butler and Schaf credit strong support from the University for assisting them in achieving acceptance to their Fulbright U.K. Summer Institutes. The Center for Fellowship and Scholarship Advising (CFSA) supports SU students and alumni in their pursuit of a variety of nationally competitive awards, helping them discern which opportunities are good fits and facilitating the rigorous application process. “Our Fulbright Summer Institute recipients are well-suited to carry out the goals of the Fulbright program: to promote mutual understanding and cultural exchange,” says CFSA director Jolynn Parker, a campus Fulbright program advisor. “They’ve earned a unique opportunity to explore the culture and heritage of the U.K., as well as to learn about higher education at a U.K. university.”

For Butler, the benefits included increased confidence, greater intellectual and cultural insight and a valued network of new international friends and mentors. She encourages anyone who is eligible to go for it. “What other opportunity could you have in your life to be not just a tourist in a country, but a guest?” she says.

The deadline for applications for the Fulbright U.K. Summer Institutes is Wednesday, Feb. 7. For more information, contact CFSA at 315.443.2759.