Road to Oz Leads to Russia

L. Frank Baum’s “The Wonderful Wizard of Oz” stands as one of America’s most beloved children’s stories, with endless spinoffs and familiar pop culture references. Mention “Wicked Witch of the West” or “Yellow Brick Road” and most people—especially in Central New York, where Baum was born—immediately know what you mean. Turns out the story shares a parallel history in Russia, thanks to an adaptation by the Soviet writer Aleksandr M. Volkov. 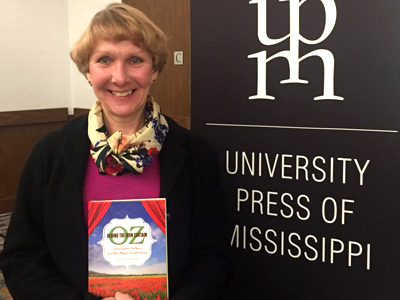 A new book by Erika Haber, associate professor of Russian language, literature and culture in the College of Arts and Sciences, examines the circumstances behind Volkov’s work and compares the contexts and details of the two versions of the perennially popular tale. “Oz Behind the Iron Curtain: Aleksandr Volkov and His ‘Magic Land’ Series” (University Press of Mississippi) took Haber from Syracuse’s Oakwood Cemetery, where Baum’s family is buried; to Chittenango, which hosts an annual festival honoring all things Oz; from Moscow, where Volkov lived and wrote his stories; to Siberia, where she researched Volkov’s papers. She also dug into Syracuse University’s Special Collections Research Center, which houses the L. Frank Baum Papers.

“I was interested in how Baum’s story was able to transcend cultural barriers during the Cold War and how Volkov transferred this story into his culture,” Haber says. “Both books were politicized, but what’s more important is the context in which their work fit into children’s literature.”

Baum, born in 1856, worked as a salesman and a journalist, and wrote, produced and performed in theatrical productions before writing children’s books. “The Wonderful Wizard of Oz,” was published in 1900. He wrote 13 more Oz volumes before he died in 1919.

Metro-Goldwyn-Mayer released “The Wizard of Oz,” the film starring Judy Garland as Baum’s Dorothy Gale, in 1939. Volkov, born in 1891 in what is now Kazakhstan, published “Wizard of the Emerald City” the same year. He significantly revised the book in 1959 and wrote five more original volumes in his Magic Land Series before his death in 1977. 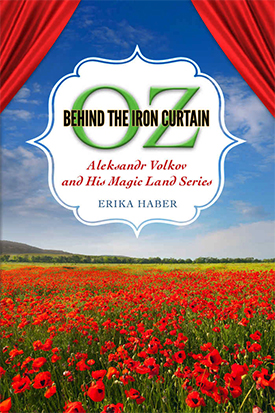 “Oz Behind the Magic Curtain: Aleksandr Volkov and His ‘Magic Land’ Series” (University Press of Mississippi)

“He corrected facts,” Haber explains. “He saw a lot of problems with the logic.” He makes Elli’s house a trailer, more likely to lift off and twirl than Baum’s house. He changes Baum’s Tin Woodman to an Iron Woodman because iron rusts and tin does not. When Elli melts the Wicked Witch, Volkov logically leaves her clothes and shoes behind.

Although Volkov worked amid the threat of Stalin’s purges, his changes do not “Sovietize” the story. “Here and there he tweaked only a few small details to make the story more familiar to a Russian-speaking audience,” Haber writes. “It’s remarkable he got it out there.”

For many years, critics, scholars and librarians largely ignored or dismissed both writers, whose work they considered “culturally significant but critically suspect.” And both were misread as political and social commentators. “They are imaginative writers,” Haber says. “They made it up.”

Her book includes detailed biographical sketches of both writers. Baum’s mother-in-law, Matilda Joslyn Gage (1826-1898), was a prominent suffragist, writer and activist. Baum and Maud Gage were married in Gage’s Fayetteville home, now the site of the Matilda Joslyn Gage Foundation.

Haber notes another Syracuse connection. Baum’s great-uncle, Philip Baum, was grandfather to Dwight James Baum ’09. Dwight Baum designed Hendricks Chapel, the College of Medicine and Maxwell School of Citizenship. As if to reinforce the coincidences that characterized Haber’s research, her book was released one day after Syracuse Stage opened its adaptation of “The Wizard of Oz.”

“I came to appreciate both stories,” Haber says. “They evolved from children’s literature and remain cultural icons.”