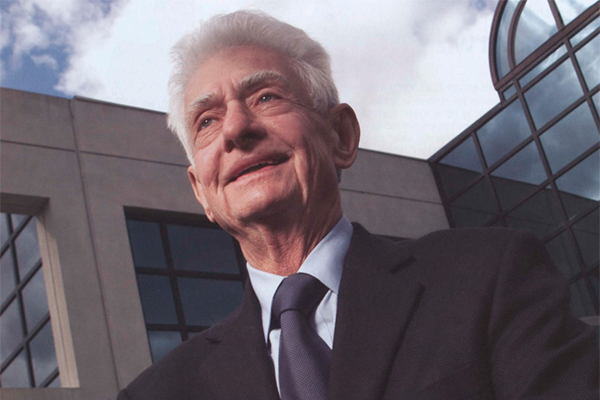 Joseph O. Lampe ’53, L’55, a tireless supporter of and ambassador for Syracuse University and former chair of its Board of Trustees, passed away Jan. 25. Lampe, whose lifelong dedication to the University had earned him its highest alumni award—the George Arents Award—and an honorary degree, had served on the Board since 1987 and was a Life Trustee at the time of his passing.

Born literally steps away from Syracuse University, Lampe had deep connections to Syracuse from the moment he entered the world at the former Hospital of the Good Shepherd—now known as Huntington Hall. His impact on the University and its students continues to resonate today through his vigorous support for student scholarship programs, commitment to enhance campus diversity and leadership in key fund-raising campaigns and national alumni initiatives.

“Joe Lampe was a visionary leader whose impact on Syracuse University can be seen across campus and in the lives of countless students,” says Chancellor Kent Syverud. “He provided leadership support for numerous scholarship funds, greatly elevated the University’s presence on the West Coast and enhanced the Board of Trustees’ effectiveness and engagement through his forward-looking leadership. He was passionate about Syracuse and all things Orange, and while he will be sorely missed, he will not be forgotten.”

Lampe earned a degree in speech and dramatic arts from Syracuse in 1953, having studied under Sawyer Falk, founder and legendary professor in the University’s Drama Department. Upon graduation, he continued his education at the College of Law. While at Syracuse, he served as a member of the Air Force Reserve at Hancock Field, and upon completing his law degree in 1955 he was called to active duty.

After concluding his service with the Air Force in 1957, Lampe decided to remain in Arizona, where he had been stationed, and set up a law practice in Phoenix. He developed a specialty in real estate law, and sensing the coming population boom, he went on to launch his own real estate business. Since 1979 he served as chairman of Lampe and Company, a diversified real estate development and management firm based in Phoenix.

Lampe was deeply involved in his community and in professional and service organizations in whose work he believed. But perhaps no group benefited more profoundly from his support than Syracuse University. His family name graces the corner of East Colvin Street and Comstock Avenue, where the Joseph O. and Shawn Lampe Athletic Complex provides primary training facilities for the University’s student athletes. He provided vital support for the Student-Athlete Fund, the Our Time Has Come and College of Law scholarship funds, and a dozen other scholarship programs; and he established the Joseph O. Lampe Endowed Scholarship, which is awarded to the captains of the football and men’s basketball teams. For the College of Visual and Performing Arts, he established the Iris L. Pérez Celis Fund to support studio arts majors from traditionally underrepresented groups.

Lampe was active in the Arizona Alumni Association and also played a key role in revitalizing the Southern California Alumni Association. His leadership of that group helped to enhance and elevate the University’s national profile and support the development of signature immersion learning experiences for students.

For the Board of Trustees, Lampe served as a Life participant on the Facilities Committee, and his visionary leadership as chair of the Board from 1998 to 2004 continues to shape the way the Board stewards and conducts the business of the University today.

“Joe was everything one could hope for in a Trustee, and then some,” says Board of Trustees chair Steven W. Barnes ‘82. “His deep commitment to the University spanned a lifetime, and his service and leadership on the Board stands as an example for all of us who were fortunate to know and work with him. On behalf of the Board, I offer our deepest condolences to his wife, Shawn, and their entire family. And I hope they take comfort in knowing that his work will live on through all those students who have benefited, and will continue to benefit, from his generous support for the University and its programs.”

Lampe served on the University’s $300 million Commitment to Learning Campaign Executive Committee and on the national committee for the Campaign for Syracuse. He also served on the College of Law Board of Visitors and the Chancellor’s Council, and he was a lifetime member of the Society of Fellows.

Former Chancellor Kenneth “Buzz” Shaw worked closely with Lampe during Lampe’s tenure as chair of the Trustees. “Joe modeled ethical behavior in all his work and expected the same of all who were affiliated with his university,” Shaw says. “As a leader, he understood and respected the unique and important roles of the chair, the Board, the Chancellor and the faculty.”

In honor of Lampe’s profound contributions to the University and its students, Syracuse recognized him with numerous awards, including the SU Alumni Award in 1984, the Distinguished Service Award from the College of Law in 1991, the George Arents Award for Business and Service to Alma Mater in 2003, and an honorary doctor of laws degree in 2004.

In addition to his extensive involvement with Syracuse University, Lampe served as a trustee of the Phoenix Art Museum, where he and his wife, Shawn, took a special interest in promoting the work of Latin American artists. He also served on the board of directors for Scottsdale Healthcare and for the California Heart Center. His professional affiliations included serving as chair of the board of the National Bank of Arizona and Western Bancshares Inc.