Third-year law students are busy enough in the spring semester, preparing for final exams, studying for the bar exam, lining up job interviews and looking ahead to Commencement. But in the middle of this crowded schedule, Kimberly Grinberg, a joint J.D./M.A.I.R. candidate, is preparing for a major international conference on U.S./Mexico drug policy, treaties and cross-border security in San Diego. There, she will rub shoulders with reporters from The Washington Post and The New York Times, representatives of major think tanks and officials from the U.S., Mexico and the state of California. 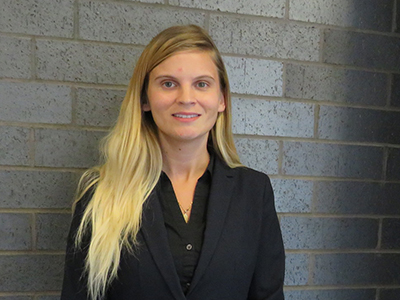 “National security and drug policy are very important areas of law,” observes Grinberg. “This conference focuses on re-examining security strategies between the U.S. and Mexico in the context of increasing violence in Mexico and persistent drug use in the U.S.”

The conference—Rethinking the War on Drugs and US-Mexico Security Cooperation—will take place on Feb. 9 at the Center for U.S.-Mexican Studies at the University of California-San Diego School of Global Policy and Strategy. Among the experts who will be evaluating the status of cross-border security cooperation and proposing solutions for policymakers will be former Maxwell School of Citizenship and Public Affairs Professor Rafael Fernández de Castro, now at UC-San Diego; Dan Restrepo, Former White House Advisor on Latin America; and two former directors of the Mexican intelligence agency.

Grinberg has been invited to speak on the roundtable “Latin American Drug Markets and the US Opioid Addiction Crisis” with Joshua Partlow of The Washington Post; José Díaz Briseño of Mexican newspaper Reforma; Gretchen Burns-Bergman of Moms United to End the War on Drugs; and Cecilia Farfán Méndez of UC-San Diego. “I have been asked to discuss, specifically, the relationship between Mexico’s drug markets and the current U.S. opioid crisis from a legal perspective.”

If it seems as though Grinberg is ahead of the curve when it comes to her chosen area of interest and her career plans, that is because she has been examining drug policy since she started college. “This was the direction I wanted to go in,” she recalls. “In college, I started a chapter of Students for a Sensible Drug Policy, where I focused on public education efforts surrounding drug-related issues.”

At the Maxwell School, Fernández de Castro nurtured Grinberg’s commitment to strategizing solutions to the world drug problem and eventually invited her to the San Diego conference. As a law student, Grinberg was mentored by Associate Professor of Law Tara Helfman. “My College of Law experience was a primary reason I was invited,” Grinberg continues. “While interning at the U.S. Attorney’s Office, I worked on narcotics prosecutions. As a student defense attorney, I represented clients accused of drug crimes in the in-house clinic. I also completed an internship at the International Drug Policy Consortium, a London-based NGO network, during my 2L summer.”

These hands-on experiences have given Grinberg the knowledge base to share the stage with other experts, publish articles on federal and international drug policy and present to local government officials on medical marijuana regulation in the context of zoning laws.

It should come as no surprise that Grinberg is in high demand in the job market. She already has an offer from the Miami-Dade State Attorney’s Office to work as an assistant prosecutor, and Helfman has encouraged her to apply for a Fulbright Scholarship to continue her studies at the University of London-Queen Mary College.

“At job interviews, I am always asked what the solution is to the world drug problem,” explains Grinberg. She says that she is in no position to posit a single theory that will solve the issue. “But I do know that international drug control suffers when it is informed by myths and fear.”

Grinberg says that currently the global focus is on interdiction efforts, which sacrifices the benefits that a public health-based approach could bring to the problem. “Persons who use drugs deserve policies that will support their existence and rights. During interviews, I state that I think the best way to begin to address the harms related to drug misuse is to interrogate the current policies critically and look at evidence-based solutions rather than fear-based ones.”