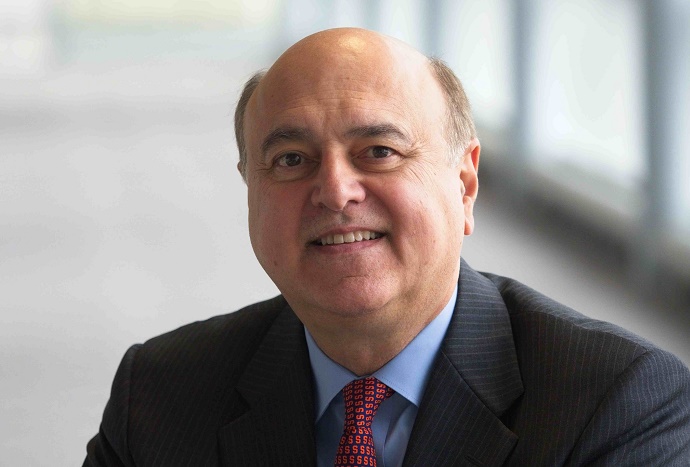 Syracuse University Trustee Edward “Ed” Pettinella G’76 MBA attributes his extraordinary 43-year career to two management principles: consistently hiring and retaining people who are ambitious, talented and motivated, and ensuring that the right people are in the right positions. The value he places on people guided Pettinella to initially endow a professorship in finance at Whitman in 2012 with a $1 million gift and, more recently, a $2 million gift to fund a new junior faculty professorship.

Pettinella grew up in Batavia, New York, in a family of modest means. “I thought of myself as middle class, and maybe that was a stretch,” he says. “We were a family of four in a small apartment. We moved into our first home when I was 12.”

A few decades later, Pettinella would become president and chief executive officer of Rochester, New York-based Home Properties, an S&P 400 company and one of the nation’s 25 largest apartment owners, with 44,000 units in 10 states. Given the early years of his upbringing, he could easily relate to apartment life.

Pettinella earned a B.S. degree in 1973 from SUNY Geneseo, where he was president of his class. With a major in business, he entered the management training program at Community Savings Bank (CSB) in Rochester. Soon after he began his career at CSB, he pursued and earned an MBA at Syracuse University. He was “singularly focused” on his concentration in finance. With encouragement from professors Alan Young and Moon Kim, Pettinella realized he had found his niche.

He returned to CSB to blaze a trail as the bank’s first investment analyst. “In the three years that followed,” he says, “everything I learned was put to the test.” Through that challenge, he developed a strong expertise in investments and asset/liability management.

To diversify his experience, Pettinella accepted an offer from the Ford Motor Credit Corporation in Dearborn, Michigan. For two years, he was part of a team that created and sold financial products to institutional investors.

By 1981, Pettinella had worked in two major industries—one public and one private—and gained a broad, dynamic repertoire of skills. Well positioned for leadership, he returned to CSB, where he moved up the ranks from vice president for investments to chief operations officer and executive vice president. In 1986, he helped take the bank public before eventually merging it with Charter One Bank and becoming president of Charter One, N.Y.

Under Pettinella’s leadership, Home Properties’ acquisitions grew by $3 billion, while assets in low-growth markets were reduced by $700 million. By redesigning company-wide compensation plans, he lowered the annual employee turnover rate from 57 to 24 percent, and he achieved a solid shareholder return over 15 years. In 2015, Pettinella shepherded the company through its purchase by Texas-based Lone Star Fund. Since the sale of Home Properties, Pettinella continues to utilize his broad background by serving on several boards, where he consults and advises on strategy, finance and human resources.

From his first management role at CSB to his last at Home Properties, Pettinella understood and exemplified people-first leadership. “I believe in a fully participative management approach—one that encourages critical thinking, idea generation and informed decisions focused on results,” he says. “Hire qualified people, provide guidance where necessary, then get out of the way and let them be successful.”

Pettinella credits much of the success he achieved in his career to his Whitman education, and he has made giving back a priority. In addition to his service as a Syracuse University Trustee, Pettinella is a member of the Whitman School of Management Advisory Council and the Kuhn Real Estate Center Advisory Board. For his career accomplishments and dedication to Syracuse University, he received Whitman’s Jonathan J. Holtz Alumnus of the Year Award. He was also named SU Dritz Trustee of the Year in 2016.

Pettinella is generous to his alma mater both in time and financial support. His recent endowment of a junior faculty professorship shows his commitment to supporting Whitman’s pursuit of excellence.

“I firmly believe that great people make great companies, and the same applies to institutions of higher learning,” says Pettinella. “We have high expectations for Whitman and our students. To bring those expectations to fruition, we need gifted and inspired faculty members—both veteran instructors who are highly accomplished and junior professors who bring the promise of new perspectives and approaches.”

Like the finance professorship he founded five years ago, the new Edward Pettinella Assistant or Associate Professorship in Business will help Whitman attract, support and keep world-class junior faculty. “We are extremely fortunate to have friends and supporters like Ed who understand that faculty are the heart of a university and how the intellectual capital of the faculty is the foundation for everything we do,” says Whitman Dean Gene Anderson.

Amber Anand, the Edward Pettinella Professor of Finance, is an example of the impact of Pettinella’s gifts to reward and retain exceptional faculty. “Ed has made a significant impact on the world of finance, banking and real estate,” says Anand. “Through the Pettinella Professorship, which I am fortunate to have been awarded, and the recently announced professorship he has established for junior faculty, Ed is furthering his impact on business. His generosity allows faculty to bring the latest research into the classroom and pursue new research avenues. Ed also embodies the best of Syracuse—great success in his field, unimpeachable integrity, genuine humility and a disarming sense of humor. I am grateful and honored to be associated with his name.”

Founded in 1870, Syracuse University is a private international research university dedicated to advancing knowledge and fostering student success through teaching excellence, rigorous scholarship and interdisciplinary research. Comprising 11 academic schools and colleges, the University has a long legacy of excellence in the liberal arts, sciences and professional disciplines that prepares students for the complex challenges and emerging opportunities of a rapidly changing world. Students enjoy the resources of a 270-acre main campus and extended campus venues in major national metropolitan hubs and across three continents. Syracuse’s student body is among the most diverse for an institution of its kind across multiple dimensions, and students typically represent all 50 states and more than 100 countries. Syracuse also has a long legacy of supporting veterans and is home to the nationally recognized Institute for Veterans and Military Families, the first university-based institute in the U.S. focused on addressing the unique needs of veterans and their families. To learn more about Syracuse University, visit syracuse.edu.