The University observes Black History Month with a visit by A.D. Carson, a hip-hop scholar who created a popular rap album to defend his Ph.D. dissertation at Clemson University. 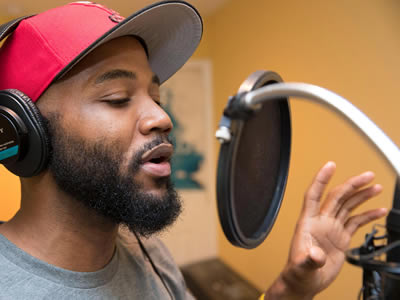 Carson, assistant professor of hip-hop and the global South at the University of Virginia (UVA), will discuss “Owning My Masters: The Rhetorics of Rhymes and Revolutions” on Monday, Feb. 5, at 5 p.m. in the Peter Graham Scholarly Commons (114 Bird Library). The event is free and open to the public.

Carson also will headline a private luncheon earlier in the day for graduate students. Titled “Owning the Dissertation,” the event is sold-out.

The Democratizing Knowledge (DK) Project in the College of Arts and Sciences (A&S) is sponsoring Carson’s visit in conjunction with the University’s Office of Multicultural Affairs. For more information, contact Hayley Marama Cavino G’09, the DK Project’s program coordinator, at 315.443.8750 or hcavino@syr.edu.

“We are honored to host A.D. Carson, whose examination of hip-hop as a cultural movement and an emergent field of academic study is particularly timely,” says Cavino, an instructor of women’s and gender studies and of Native American and indigenous studies in A&S. “He is part of a growing community of scholars utilizing hip-hop and other story forms to produce knowledges that historically have been marginalized. His visit supports the DK Project’s larger mission of developing literacies, producing transformative knowledge and supporting the creation of a more inclusive and just campus.”

An expert on race, history, literature and rhetorical performances, Carson made international headlines last year when he produced the album “Owning My Masters” for his dissertation. The 34-track project, whose title mirrors that of his talk at Syracuse, uses hip-hop to explore ideas such as identity, justice, economics, citizenship and language.

“Owning My Masters” quickly became an Internet sensation. Before Carson defended his dissertation, the album’s songs racked up tens of thousands of views on YouTube, more than 50,000 streams and downloads on SoundCloud and hundreds of thousands of hits on Facebook. Today, the numbers continue to climb.

The media has since taken notice. Shorthand Social named “Owning My Masters” the year’s best political album. Moreover, major outlets such as Time and National Public Radio have helped turn Carson into something of a cultural hero. Impressive, considering he undertook the project in a small, makeshift studio in his apartment near campus, using Adobe software provided by the University. 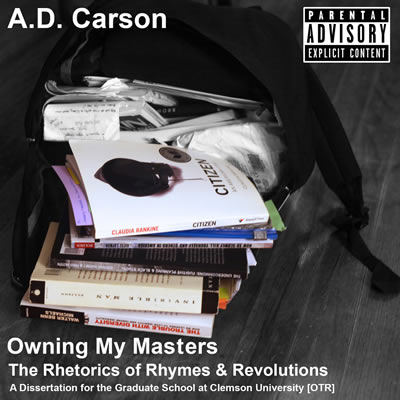 “The central thesis of my dissertation is: ‘Are certain voices treated differently?’” writes Carson on the project’s website. “I’m trying to examine how an authentically identifiable Black voice might be used or accepted as authentic or ignored, or could answer academic questions and be considered rightly academic. So I have to present a voice rather than writing about a voice.”

A self-described “performance artist and educator,” Carson studied rhetorics, communication and information design in Clemson’s College of Architecture, Arts and Humanities. While there, he won the 2017 Graduate Student Government Outstanding Dissertation award and the 2016 Martin Luther King Jr. Award for Excellence in Service, the latter on the back of his writing about the history of race at Clemson. (Carson also established the “See the Stripes” campaign, acknowledging the University’s complex racial past, while celebrating its current commitment to diversity and inclusion.) In addition to being an award-winning, published poet and essayist, he is the author of “COLD” (Mayhaven Publishing, 2011), a novel hybridizing poetry, rap lyrics and prose.

Today at UVA, Carson builds on the legacy of Kyra Gaunt, one of the forerunners of hip-hop scholarship, who taught there from 1996-2002.

In a recent interview with UVA Today, Gaunt heaped praise on Carson, a native of central Illinois. “Having him at UVA [is] such a draw for students who are musically inclined and also want to get a Ph.D. studying hip-hop. Perhaps it will send a ripple through music departments throughout the country,” said Gaunt, now an assistant professor of music at the University of Albany.