Final Call for Chancellor’s Citation for Excellence, Other Award Nominations

The Office of the Provost has issued a reminder to members of the campus community that nominations for the 2018 Chancellor’s Citation for Excellence and two other awards must be received by Jan. 25. Recipients will be recognized as part of the University’s annual One University awards program on April 20. 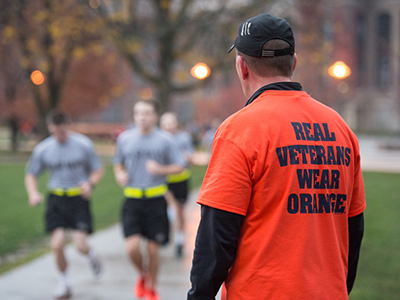 Members of the University community who have contributed toward making Syracuse the best university in the world for veterans are eligible for the Chancellor’s Citation for Excellence.

The Chancellor’s Citation for Excellence recognizes members of the University community who have made invaluable contributions in one of the following ways: creating an outstanding undergraduate experience, empowering research excellence, fostering change and innovation or positioning Syracuse as the best university in the world for veterans.

Nominations can be made under four distinct categories. More information on those categories and the requirements of nomination can be found on the award website.

Nominations for the Chancellor’s Citation for Excellence should be addressed to the Chancellor’s Citation for Excellence Selection Committee in care of its chairperson, Professor Shiu-Kai Chin, and submitted in hard copy to Associate Provost for Faculty Affairs LaVonda N. Reed, 503 Crouse Hinds Hall, 900 South Crouse Ave., Syracuse NY 13244, or by email to Sharon Alestalo at swalesta@syr.edu.

Faculty also are reminded that they can submit nominations for the Seinfeld Scholar Award and the Teaching Recognition Award. The initial call for nominations went out Dec. 15 from the Office of the Associate Provost for Faculty Affairs; the deadline for these awards, too, is Jan. 25.

The Seinfeld Scholar Award—which this year will go to two undergraduate seniors—recognizes faculty or students who have made an outstanding contribution to the beauty of the world, adding to human values and to ending human abuse anywhere in the world via any medium of expression. It recognizes those who have exhibited a passion for excellence, creativity and innovation in academic or artistic fields; encourages continued outstanding performance; and acknowledges recipients’ ability to motivate and inspire the best in others.

The fellowship program runs on a three-year cycle, with one faculty member recognized as a Seinfeld Scholar in each of the first two years and two graduating seniors recognized in the third year.

The Teaching Recognition Award program recognizes excellence in teaching and is an expansion of the Laura J. and L. Douglas Meredith Professorship Program initiated at the request of the Meredith Professors. Faculty with at least two years’ teaching experience at Syracuse are eligible, including tenure-track faculty who are not yet in their sixth year credited toward tenure; full-time, non-tenure-track faculty; and adjunct and part-time faculty.

For more information on the Seinfeld Scholar and Teaching Recognition awards, including full requirements of nomination, go to the Faculty Recognition Programs website here.

Completed nominations for both the Seinfeld Scholar and the Teaching Recognition awards should be addressed to the award review committee and submitted in hard copy to Associate Provost for Faculty Affairs LaVonda N. Reed at 503 Crouse-Hinds Hall and by email as a single PDF to Sharon Alestalo at swalesta@syr.edu.