Syracuse Stage and Rain Lounge will present the inaugural Salt City Drag Battle on Friday, March 23, in the Archbold Theatre at the Syracuse Stage/SU Drama Complex, 820 E. Genesee St. Who will be named the first-ever Salt City Queen or King and win a $1,000 cash prize? 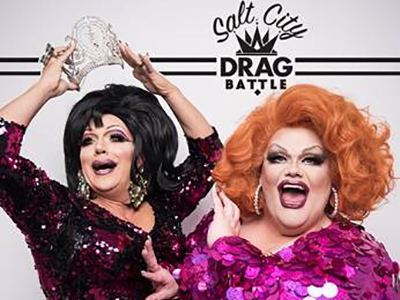 Participants will be selected through a video application process on the Syracuse Stage website, which is open now. Interested participants should provide video of past performances. Deadline for submissions is March 5.

Hosted by “RuPaul’s Drag Race” alumni Mrs. Kasha Davis and Miss Darienne Lake, proceeds from the Salt City Drag Battle will benefit Syracuse Stage artistic programming. The pageant will feature eight contestants, who will showcase two looks and one talent performance. Finalists will then compete in a lip-sync battle for a winner-take-all grand prize.

“Syracuse Stage is excited to feature some great Central New York talent on our stage and we’re looking forward to seeing the videos people submit,” says Jill Anderson, managing director of Syracuse Stage. “As a fundraiser, we thought the Salt City Drag Battle would be a great fit because drag pageants embody some of the well-loved elements of theater: spectacular showmanship, skilled entertainers and, of course, gorgeous costumes.”

Tickets for the Drag Battle are now on sale at the Syracuse Stage Box Office, 315.443.3275 and online. General admission tickets are $25. VIP tickets that include selected priority seating and a post-show champagne reception with the hosts are also available for $50.