A group of eight journalism students from the Newhouse School spent the 2016-17 academic year examining a national issue with local implications: police-community relations.

The result of their work is “They Wear Blue,” a multimedia project that provides an inside look at members of the Syracuse Police Department (SPD). Because the population of the City of Syracuse is nearly 50 percent minority but only 1 in 10 SPD officers is non-white, the project pays special attention to minority officers.

Among the stories are an intimate look at SPD Chief Frank Fowler, who grew up in Kinloch, Missouri, near Ferguson, site of the 2014 police killing of Michael Brown—an incident that generated a national discussion about police relations with black citizens.

Justin Mattingly, who wrote the article, and Michael Santiago, who handled visuals, accompanied Fowler on a trip back to his hometown.

“I’d written profiles before, of course, but nothing really to this extent,” says Mattingly. “Michael and I had said we were going to capture why Chief Fowler views the community the way he does—and that all goes back to his upbringing outside St. Louis. The chief and I share a favorite baseball team, the Cardinals, and small conversations about the Cardinals of his childhood opened up deeper conversations about his upbringing and experiences.”

Mattingly says one of the most challenging parts of the project was getting people to open up to him. “I’m from a small town with one police officer, making me a white outsider. It would have been easy for subjects to [discard] my intent because of that, but it was rewarding to have these intimate conversations with them after developing a sense of trust.” 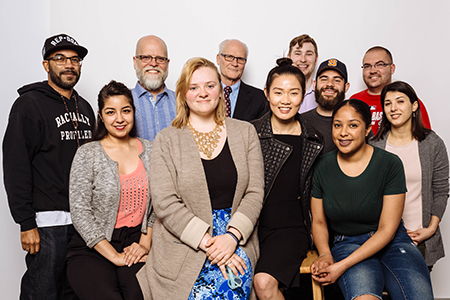 The team that produced “They Wear Blue,” including student reporters and photographers, along with professors (Photo by Michael Santiago)

“They Wear Blue” is a product of Newhouse’s Team Journalism course, a capstone-level, invite-only class co-taught by Steve Davis, associate professor of newspaper and online journalism, and Bruce Strong, chair of multimedia photography and design (MPD). The unique course was spread out over two semesters, beginning in Fall 2016. Students, who were chosen for the course based on their talent and demonstrated skills, began by researching and developing story ideas in the fall. They implemented the project in the Spring 2017 semester.

“I hope visitors [to the site] will understand that the issue of policing is very complex,” says Mattingly. “Neither side is perfect. But it takes the courage to hear the other side out and to know that there are people—actual people—on the other side of your statements and opinions. Hopefully we were able to capture the scope of the topic and open our readers’ minds to new perspectives.”

Other students who contributed to the project were Max Jakubowski, Jasmine Gomez and Samantha Mendoza (reporting); and Bryan Cereijo, Kathleen Flynn and Frankie Prijatel (visuals). Along with Davis and Strong, MPD assistant professor Renée Stevens and staff member Ashley Kang, director of The Stand, Syracuse’s South Side Newspaper Project, served as advisers.