SUArt Galleries Presents ‘Kiki Smith and Paper: The Body, the Muse, and the Spirit’

The Syracuse University Art Galleries will present “Kiki Smith and Paper: The Body, the Muse, and the Spirit” beginning Jan. 18. Organized by the Oklahoma State University Museum of Art and guest curated by Wendy Weitman, former curator in the Department of Prints and Illustrated Books at the Museum of Modern Art in New York City, this exhibition features over 25 original works by Smith, including drawings, etchings, lithographs, artist books and sculpture. Heralded as one of the most distinctive voices of her generation, Smith has been preoccupied with considering the female figure from every possible perspective—physically, culturally, historically and personally. This exhibition highlights Smith’s passion for paper as she has explored aspects of femininity throughout her highly acclaimed career. 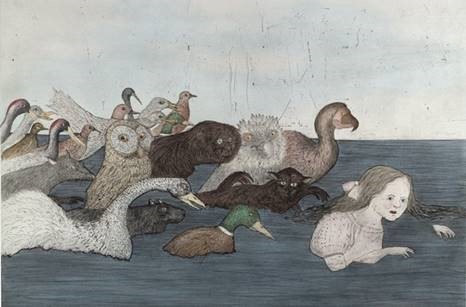 The exhibition will be on view through March 9, 2018, in the Shaffer Art Building at Syracuse University. Gallery hours are Tuesday-Sunday, 11 a.m.-4:30 p.m.; and Thursdays 11 a.m.-8 p.m. The gallery is  closed on University holidays. The SUArt Galleries will host a gallery reception  from 5-7 p.m. on Thursday, Feb. 1. Patrons are welcome to view  the exhibition until  the gallery closes at 8 p.m. The reception is  free and  open to the public. A fully-illustrated exhibition catalog will  be available for sale in the Gallery Shop.

“Kiki Smith and Paper: The Body, the Muse and the Spirit” explores Smith’s fascination with the human body—and the female body in particular—alongside themes of birth, death and regeneration, through a selection of objects that represent the one medium with which Smith has consistently engaged: paper.

A multi-disciplinary artist, Smith is well known as a printmaker, having worked extensively in etching, lithography, screenprint, rubber stamp, tattoos and other techniques since the late 1980s. Drawing has also been fundamental to her printmaking, as well as a prolific expressive tool on its own.

However, it is her paper sculptures that project the pathos and fragility of the human spirit most poignantly, according to Weitman. Though Smith has constructed sculptures from many materials, Weitman says the humble status of paper, and its rare use in the medium of sculpture, is something Smith relishes.

Throughout her career, across a variety of media, much of Smith’s work has addressed the realms of human anatomy, the human condition in relationship to nature and the cycle of life and spirituality. However, the female figure in particular is something that has preoccupied Smith since the early 1980s.

Smith (American, b. 1954, Nuremberg, Germany) has been known since the 1980s for her multidisciplinary practice relating to the human condition and the natural world.  She uses a  broad variety of materials to continuously expand and evolve a body of work that includes sculpture, printmaking, photography, drawing and textiles.

Smith has been the subject of numerous solo exhibitions worldwide including over 25 museum exhibitions. Her work has been featured at five Venice Biennales, including the 2017 edition. She is a member of the American Academy of Arts and Letters and the American Academy of Arts and Sciences, and in 2017 was awarded the title of Honorary Royal Academician by the Royal Academy of Arts, London. Previously, Smith was recognized in 2006 by TIME Magazine as one of the “TIME 100: The People Who Shape Our World.”

Other awards include the Skowhegan Medal for Sculpture in 2000; the 2009 Edward MacDowell Medal; the 2010 Nelson A. Rockefeller Award, Purchase College School of the Arts; the 2013 U.S. Department of State Medal of Arts, conferred by Hillary Clinton; and the 2016 Lifetime Achievement Award from the International Sculpture Center, among others. She is an adjunct professor at NYU and Columbia University.