Uncovering and communicating the truths about human conflict, human suffering and human rights violations is a complicated but vitally important task that often falls to those who write the “first rough draft of history”—that is, journalists operating on the front lines of conflict zones or under cover. 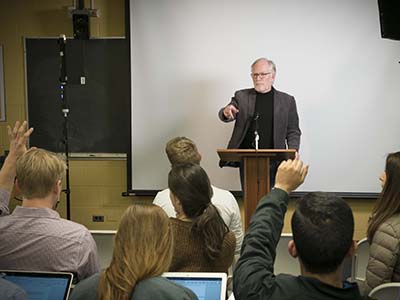 Professor David Crane calls on a student in the course Media and Atrocities. (Photo by Ken Harper)

Training communicators to make sense of atrocity and humanitarian disaster was the motivation behind Media and Atrocities, an interdisciplinary course offered for the first time this semester at Syracuse University. The course was co-taught by David Crane, professor of practice in the College of Law and member of the faculty of the Institute for National Security and Counterterrorism, and Ken Harper, associate professor of multimedia photography and design in the Newhouse School and director of the Newhouse Center for Global Engagement.

The course examines the critical roles that law, policy and communications play in ensuring truth-telling and securing justice for victims of atrocity, often by providing international law organizations with the raw information they require to bring humanitarian law violators to justice. Harper says he and Crane believe it’s the first university course of its kind.

“These students will become young professionals who are trained to seek and present information on atrocities, genocide, disaster … basically, making the unthinkable understandable,” says Harper.

Among the required readings were “A Problem from Hell” by Samantha Power and “A Long Way Gone” by Ishmael Beah. Several non-fiction films were also recommended, including “Restrepo: Injured Boy” and “Jim: The James Foley Story,” as well as fictional films such as “Blood Diamond,” “The Bridge On the River Kwai” and “Judgement at Nuremberg.”

Students in the course included both undergraduate and graduate students from a variety of programs across campus, such as international relations, broadcast and digital journalism, public affairs, photography and law. They began the semester by examining the meaning and history of atrocity, reviewing legal developments over the past century and learning about the modern international criminal law system.

Most of the semester was spent building a mock postconflict justice tribunal for Syria. Students chose various roles—such as prosecutor, journalist, public relations officer or activist—and carried out a series of practical exercises in preparation for the final exercise, held on the last day of class: a press conference called by the mock tribunal’s chief prosecutor (played by Crane) announcing an indictment against Syrian President Bhashr Hafez Al-Assad.

Students also set up a public relations office; organized a PR plan; staged a news broadcast; and developed a coordination plan for NGOs working in Syria, as well as a model for the organizations to work together into the future.

Zach Krahmer, who is earning a master’s degree in photography from the Newhouse School and an executive master’s degree in international relations from the Maxwell School, says he chose to enroll in the class because he is interested in conflict resolution and has worked with communities that have experienced trauma. “I wanted to think critically about the way we produce and consume media that involves atrocities, and the responsibility that implies,” he says.

He notes a particular assignment that had him and his classmates explore the ways social media have been used in various campaigns, with the resulting presentations touching on everything from the Colombian plebiscite to Buddhist extremist groups in Myanmar to Assad. “I was surprised by the innumerable ways that perceptions of events had been manipulated by tactful use of media,” he says.

Krahmer, along with fellow students Katie Conti and Maggie Mabie ’16, acted as Crane’s media team for the mock tribunal. They staged the public release of an indictment against a sitting head of state; wrote, edited and delivered a press release; and crafted the chief prosecutor’s press briefing. “It was valuable to experience the deliberation that goes into crafting public messages such as these,” he says. Mabie, who earned a bachelor’s degree in public relations from the Newhouse School and is now a joint J.D./M.P.A. student in the College of Law and the Maxwell School, says the final exercise was one of the most powerful parts of the class. “Everyone treated the simulation as if it were real.”

Following the class, Krahmer says, “I have a greater appreciation for the way media can be leveraged by different actors to achieve their goals.”

Crane knows intimately how important good journalism and good public relations are to the success of postconflict justice. As the founding chief prosecutor of the Special Court for Sierra Leone—an international war crimes tribunal set up after a devastating civil war—Crane held frequent press conferences and town hall meetings with ordinary citizens seeking justice for war crimes and crimes against humanity, helping them to engage with a lengthy and esoteric process and to accept its findings.

Today, Crane and his law students in the College of Law’s Syrian Accountability Project (SAP) rely on ground reports from reporters, photojournalists and others in the field. SAP is an internationally recognized, cooperative effort to document war crimes and crimes against humanity in the Syrian Civil War. The students log reports of crimes in their “Crime Matrix,” which is filed with international clients such as the United Nations and International Criminal Court. The intent is that the Crime Matrix will help form the basis of a prosecution of those most responsible for humanitarian crimes after the conflict ends.

Crane and Harper have collaborated on several recent SAP projects, including the event Running for Cover and the white papers “Looking Through the Window Darkly”; “Covered in Dust, Veiled by Shadows”; “Idlib Left Breathless”; and “Report on the Yazidi Genocide.”

“In a conflict zone, the free press is often another victim of tyrants and unscrupulous warriors, and journalists must do their work in extremely dangerous conditions. Certainly, Ken and I know first hand the difficulties reporters face when documenting human suffering, and the Syrian Accountability Project has recorded many crimes against journalists during that conflict,” says Crane. “Nevertheless, throughout the world there are brave reporters who risk their lives, not only filing reports so the world can witness atrocity but also acting as advocates for those who have no voice. In this course, Ken and I worked together from different disciplines to instill a sense of the responsibility communicators in war zones have, how their work can bring hope and eventually justice to the afflicted and the importance of professionalism in extreme conditions.”