The realm of technology commercialization is fond of its geographical metaphors. Researchers and entrepreneurs who seek to make their discoveries commercially viable talk of intellectual property “landscapes,” “routes” or “paths” to market, as well as technical and regulatory “milestones.” But there is one image that is somewhat darker: the “valley of death.” 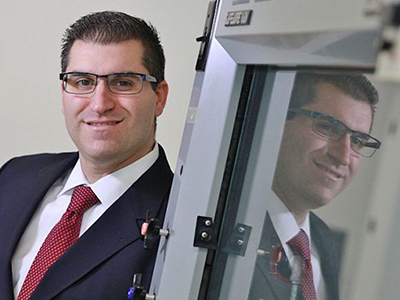 That “valley” describes the space between the laboratory bench and the marketplace, where projects can stall for want of business acumen, start-up funding or intellectual property protection. It’s a space that Joseph Scaduto is determined to traverse successfully as he collaborates with two Stony Brook University bioscience researchers to commercialize novel inflammatory disease therapies with the help of the College of Law’s New York State Science and Technology Law Center (NYSSTLC).

In fact, so determined is Scaduto to navigate the “valley of death” that he named his start-up venture Traverse Biosciences: its logo appropriately stylizes two mountain peaks. Traverse Biosciences currently is working to commercialize one of its patented biochemical discoveries, TRB-N0224, a potentially ground-breaking disease therapy. The initial application is to treat canine and feline periodontal disease.

“I’ve been working in the ‘valley’ for more than a decade,” says Scaduto. “I’ve seen the challenges that commercializing academic research can run into when you try to create a product and find funding and other resources. There are a lot of inefficiencies in early-stage technology commercialization, and failure is all too common.” While some entrepreneurs might describe a dream that keeps them motivated, Scaduto says one of the driving forces behind his career is the way he’s “irked” by these commercialization inefficiencies that in turn “lead some to be critical of government investment in basic research.”

Scaduto’s partnership with NYSSTLC has been a return home of sorts. “In my previous life, I was assistant director of business development at Stony Brook’s Center for Biotechnology, and I was an early partner of College of Law commercialization law program founder Ted Hagelin. I had a great working relationship with Ted, and through his leadership, a network of technology commercialization clinics was established across New York State to help researchers understand markets, IP protection and regulatory landscapes.”

After leaving the Center for Biotechnology, Scaduto founded Traverse Biosciences in 2013 and investigated a viable biotechnology to commercialize. He eventually teamed up with professors Lorne Golub of Stony Brook’s School of Dental Medicine and Francis Johnson of the departments of chemistry and pharmacology.

Golub and Johnson were designing and testing compounds that showed promise as anti-inflammatory agents, and TRB-N0224 went to the head of the pack as a candidate for commercialization in Traverse Bioscience’s suite of novel compounds. This drug is envisioned as the first FDA-approved, once-daily prescription for the prevention and control of canine and feline periodontal disease (the disease affects approximately 80 percent of dogs by age 3, particularly smaller breeds).

“I’m now experiencing commercialization as a company owner,” observes Scaduto, “so it was natural for me to return to the two centers I know well in order to understand the issues we would have in commercializing these discoveries. I asked myself, could someone with my knowledge of commercialization create a technology that could successfully hit lab-to-market milestones?”

“Traverse Biosciences is a story about how federally funded university research ideally goes to market,” says Zimmermann, praising Scaduto’s role in creating the statewide innovation ecosystem that his company now benefits from. “At the Center for Biotechnology—one of many NYSTAR (New York State Division of Science, Technology and Innovation )-sponsored research centers—Joe recognized the importance of vetting new discoveries for commercial potential.” Scaduto also worked with Ted Hagelin to obtain funding for what became the NYS Technology Commercialization Clinic Network that “link university engineers and scientists to entrepreneurs, funders, pitch coaches, accountants and others,” says Zimmermann.

The NYSSTLC receives referrals from one of the commercialization centers, and then teams of College of Law students—guided by professors with experience in product development —complete the IP, market, regulatory, and commercialization analyses needed to make a “go/no-go” decision on the moving the technology forward.

“The law center helped me make sense of general and strategic business questions, such as the market size and opportunities, as well as regulatory pathways, for our anti-inflammatory therapies,” explains Scaduto. “This work helped us to clearly realize what our opportunities were, develop our business plan, and focus our efforts.”

Scaduto explains that one barrier to commercialization within the “valley of death” is that a small company often has few labor resources, “so it’s important for entrepreneurs to realize they can use a center such as NYSSTLC—and the alphabet soup of other resources throughout the state—to provide them with more bandwidth. This invaluable support can also lead to networking and funding opportunities.”

Traverse Biosciences has realized many of these opportunities in the last few years as it brings TRB-N0224 online. Among its news announcements in 2017 alone, the company was awarded a patent in January for uses for its proprietary library of chemically modified curcumins (plant chemicals found in turmeric and ginger), including TRB-N0224; it won the Association of American Universities and Association of Public and Land-Grant Universities inaugural University Innovation and Entrepreneurship Showcase; and it received a $1.32 million Phase II Small Business Technology Transfer Award from the National Institutes of Health.

Traverse Biosciences has already begun testing the compound in partnership with a Top 10 global animal health organization. “While for humans, we’re at a pre-clinical stage of development,” says Scaduto. “We currently are determining which human therapeutic indication to focus on, before moving on to safety studies, the submission of an Investigational New Drug (IND) application, and eventually human clinical trials.”

As someone who has been on both sides of the “valley”—as a business advisor and now as a successful entrepreneur—it’s no surprise that Scaduto has plenty of advice for young start-ups.

“You need to stay goal-oriented and milestone-driven,” Scaduto advises. “It’s easy to be distracted, and you will certainly face disappointments, but you must continue to achieve goals that add substantive value to your technology, and stay the course for the sake of your collaborators, licensing partners, and investors. Always understand what needs to be accomplished within a certain timeframe as you ‘traverse’ toward the marketplace.”