South Africa holds a special place in the heart of Brian Konkol, the newly installed dean of Hendricks Chapel. 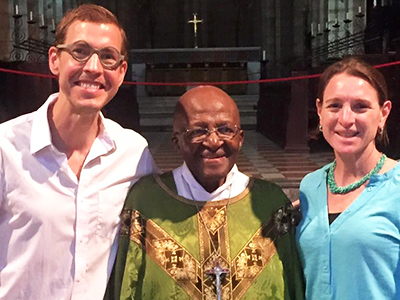 From 2008-12, Konkol and his wife, Kristen, served in South Africa as country coordinators of the Young Adults in Global Mission program of the Evangelical Lutheran Church in America. He also taught at a local seminary and assisted in parish ministry alongside isiZulu-speaking congregations, and she taught classes in exercise science, managed a research lab and helped to start a local soccer academy. Kristen Konkol now teaches in the Department of Exercise Science in SU’s School of Education and is working on a holistic sport initiative.

The Konkols both earned doctor of philosophy degrees at the University of KwaZulu-Natal in South Africa. And it is where they welcomed their first child, a son, in 2010. Their daughter was born shortly after moving back to the United States in 2012.

For the first time as a family, the Konkols will visit South Africa this holiday season. Dean Konkol has been invited to guest preach at the iconic St. George’s Cathedral in Cape Town on Sunday, Jan. 7, during the weekend of the Epiphany, a Christian feast day commemorating the visit of the wise men to the baby Jesus.

Known as the “People’s Cathedral” for its deep commitment to the struggle against apartheid, St. George’s is the oldest cathedral in Southern Africa and the mother church of the Anglican Diocese of Cape Town. Renowned theologian, human rights activist and Nobel Peace Prize laureate Desmond Tutu led several historic marches against apartheid from the steps of St. George’s during his time as the diocesan archbishop from 1986-1996.

Reflecting upon the liturgical theme of the Epiphany, Konkol plans to deliver a sermon on the importance of listening in transforming conflict into peaceful and sustainable livelihoods. 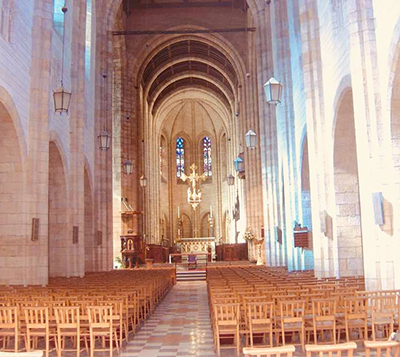 Throughout his work and ministry, Konkol has drawn a great deal of inspiration from St. George’s spiritual, cultural and political significance. St. George’s is a model of what he believes the role of Hendricks Chapel to be in the Syracuse University community.

“From its Anglican roots to its interfaith reach, St. George’s not only impacts those inside its walls, but the well-being of those around it, regardless of religious or spiritual identity,” he says. “Their principled and sustained commitment to the common good serves as a living example for Hendricks Chapel and countless other communities around the world.”

Brian and Kristen Konkol, who last visited South Africa in 2016 to co-teach an undergraduate course, are excited to bring their children to this special place where their lives have been deeply impacted.

“We want our children to see that the world is both large and small, and they are a part of it, and have a responsibility to serve for the sake of it,” he says. “This all should be a reminder that we are a global community—not just a collection of diverse people but a totality of connections that stretch around the world and bind people together.”