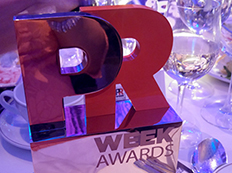 The public relations program in the Newhouse School has been named a finalist for the PRWeek Award in the Outstanding Education Program category. Finalists in all PRWeek Award categories were announced Dec. 6.

The PRWeek Awards are considered one of the communications industry’s highest accolades. Winners will be announced March 15 at a ceremony in New York City.