VPA Student to Appear on ‘Who Wants to Be a Millionaire?’ 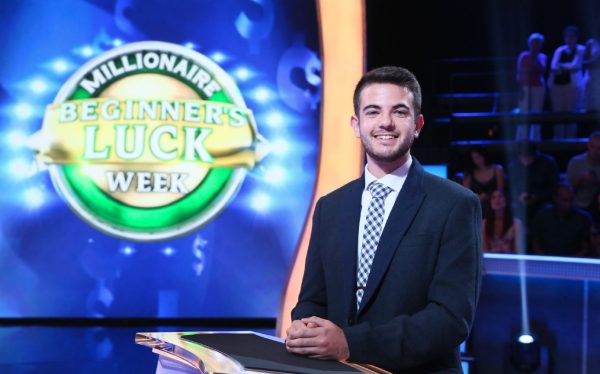 Jesse Scheinbart appears on the set of “Who Wants to be a Millionaire?”

What started as a search for theater auditions turned out to be a million-dollar opportunity for Jesse Scheinbart ’18, a music major from the College of Visual and Performing Arts. “It happened so fast,” says Scheinbart, who was selected as a contestant on the game show “Who Wants to be a Millionaire?” this past summer. The show is taped for later broadcast, and will air on Dec. 12 at 12:30 p.m. (locally in Syracuse on WSYR-TV). 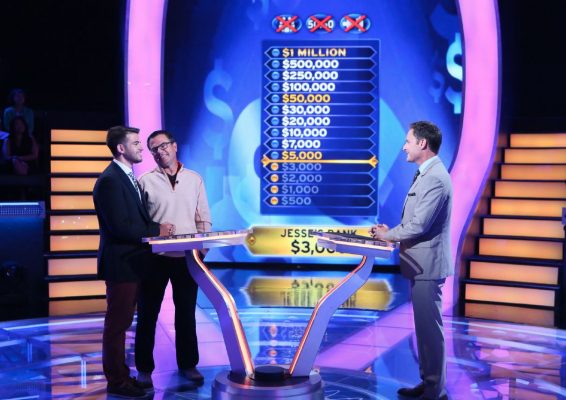 For Scheinbart, it all started during his internship in Boston this past summer. “I was looking for theater auditions, and saw where auditions for ‘Millionaire’ were being held in town,” he says. “The first day of my internship was the day of the audition, so I raced across town and got there to find 40 other people in my group.” Prospective contestants were given a trivia quiz, and from there, the number was whittled down to eight. “Each of us was given an on-camera interview in which we were asked to ‘think out loud,’ just like on the show.” After the audition ended, Scheinbart resumed his internship and his summer. A couple of weeks later, he received an email telling him he was in the “contestant pool,” which meant he could be called at any time, but also was no guarantee he would appear on the show. “My parents cautioned me about getting too excited,” he says.

But then, as the dog days of summer approached, the phone rang. It was the show producer, congratulating Jesse and inviting him to Las Vegas. where “Millionaire” is produced. “I went with my parents, and we made a little vacation out of it,” says Scheinbart.

Of course, you’re probably wondering if Scheinbart actually became a millionaire. He’s not allowed to say, nor discuss game play, before the show airs next Tuesday.

Scheinbart is inviting anyone who cares to attend to a viewing party to be held at the Schine Dining Center beginning at noon that day. Otto Tunes will perform (Jesse leads the group) leading up to the show at 12:30 p.m. “I hope everyone can attend,” says Scheinbart, not giving away any clues to his performance. We’ll have to wait for the show to find out.