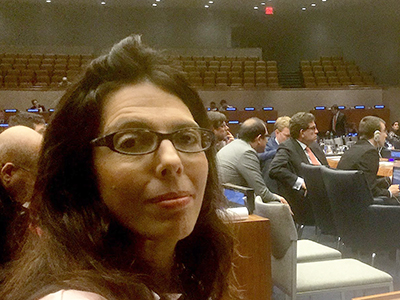 “Few people know that the UN has taken a leading role in counterterrorism efforts around the world,” says Zoli. “Two weeks after the terrorist attack of Sept. 11, 2001, the UN unanimously established the Counter-Terrorism Committee (CTC) by Security Council Resolution No. 1373 (2001), comprising all 15 Security Council members. To help advise member states around the world in measures to advance their legal and institutional capacity to counter terrorist groups, attacks and criminal activities, the Security Council in 2004 established CTED to assist in the research needed to help the CTC monitor and implement counterterrorism measures, from criminalizing the financing of terrorism to information sharing about safe havens or groups supporting terrorists.”

At both events, Zoli provided insights on data-driven approaches to understanding terrorism, radicalization and countering violent extremism (CVE). She also shared information with colleagues and delegates on the systems, critical infrastructures and organizational structures that terrorist organizations often use to effect their goals of political violence and creating fear among local populations.

At the UN headquarters event, Zoli was included as an expert on questions from concerned delegates from across the globe interested in understanding “best practices” to combat terrorism. Queries posed included how to lawfully deal with foreign fighters returning home and what measures should be taken for counter-radicalization, including for women and children who were also drawn to the Levant by groups such as ISIS and Al Nusra.

Zoli’s presence at this conference continues INSCT’s close collaboration with UN CTED. For the past few years, law and graduate students in INSCT’s Law 822 Research Center have presented research to the directorate on how UN member states are complying with UN Security Council Resolution 2178, which calls on members to prevent the “recruiting, organizing, transporting or equipping of individuals who travel to a State … for the purpose of the perpetration, planning of or participation in terrorist acts.”

In May 2016, INSCT was invited by UN CTED to join The Prevention Project, directed by former US Department of State counterterrorism official Eric Rosand through the Global Center on Cooperative Security. The project aims to support member states’ efforts to deal holistically and constructively with citizens who travel to fight with extremist and terrorist organizations.

While the flow of FTFs to Iraq and Syria has slowed, returnees and the relocation of fighters from the conflict zones to other regions present a considerable threat to international security. The flow of returnees risks spreading the threat posed by individuals loyal to ISIL to new regions. In addition to calling for terrorist attacks on an international scale, terrorist organizations—including ISIL (Da’esh), Al-Qaida, Boko Haram and Al-Shabaab—have compensated for their territorial losses by expanding their presence to new areas. This session focused on discussing challenges related to returning and relocating foreign terrorist fighters (FTFs).

Some member states are concerned that the numbers of FTFs returning to their countries of origin, potentially intending to perpetrate attacks, in combination with those being radicalized to violence within those countries, present a growing challenge to national security. The purpose of this session was to share and discuss good practices in countering violent extremism (CVE), including the role of the media, civil and religious society, the business community and educational institutions to enhance dialogue and broaden understanding, and in promoting tolerance and coexistence, and in fostering an environment which is not conducive to incitement of terrorism.

Over recent years, the proportion of terrorist plots resulting in fatalities has increased, in part due to the activities of returning and relocating foreign terrorist fighters (FTFs), as well as due to the evolution in terrorists’ modus operandi, including: (i) their use of basic (legal and easily accessible) tools that reduce opportunities for detection and disruption; (ii) their emphasis on (often poorly protected) civilian targets; and (iii) their use of information and communications technologies (ICT), including encrypted messaging services, for terrorist purposes, including to remotely guide single-perpetrator terrorist attacks. The purpose of this session was to analyze and discuss challenges and good practices related to preventing terrorist acts against civilians.

Session IV: The Future of the Global Research Network

The purpose of this session was to assist CTED in its preparation of: (i) a list of specific trends, developments and issues that require further research and analysis; and (ii) an internal work plan for future engagement with members of the network, with a view to developing further evidence-based research that can support the work of the committee and CTED.