The College of Law celebrated the graduation of nine master of laws in American law students—representing seven countries across three continents—at a Commencement ceremony in the Melanie Gray Ceremonial Courtroom in Dineen Hall on Dec. 1. 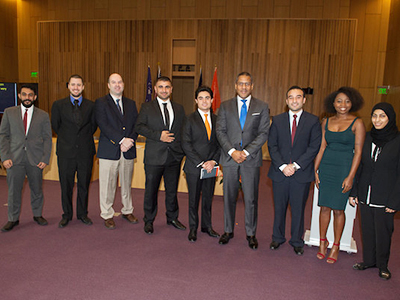 LL.M. graduates at their Commencement ceremony on Dec. 1

Introducing the graduates, Dean Craig M. Boise noted that the geographical diversity of the cohort, which matriculated in January 2017, is matched by its diversity of interests and expertise, in international law, immigration law, human rights, women’s rights, corporate and commercial law, and public sector law and policy.

“Your multiple points of view, divergent backgrounds from alternative legal traditions—not to mention your enthusiasm and wisdom—have enriched and strengthened the College of Law,” said Dean Boise in his remarks. “I have no doubt that your personal and professional experiences have amplified the law school experience for our juris doctor students, and I thank you for your contribution to the college’s community and to its scholarship.”

Dean Boise added, “I hope and fully expect that the LL.M. degree you have earned will not only advance your individual careers but also the nations which you represent, as well as the rule of law worldwide.”

Alumna Brigitte Herzog L’75, delivering the Commencement address, congratulated the students on mastering the “difficulties of studying a legal system which is different from your own and in a language which is not your native one.”

Herzog, an expert in comparative and international law, observed that the students will face new tests arising from their status as LL.M. graduates of an American college. “The first challenge you will face,” she said, “will be to readjust to an environment you thought you knew well but which will be different because you will look at it with a new set of eyes.” She implored the graduates to continue to improve their legal skills, to push for needed changes when appropriate and to keep a “good moral compass.”

“When you’re a leader, people watch you,” Herzog said, “and when you make tough decisions, they might not like it at first because you will be disrupting the status quo, but if you have followed a good process to reach your decision and it is fair, it will be accepted.”

Noting that the first challenge the graduates had to face in January 2017 was a frigid Central New York winter, having “arrived from sunny climates,” Assistant Dean of International Programs Andrew Horsfall told the cohort, “You embarked on a rigorous academic journey, getting to work in the classroom, in our job shadow program and in summer internships, not only surviving but thriving. You were a pleasure to get to know.”

Diego Sanchez Labrador LL.M.’17, offered remarks on behalf of the students, asking, “What is our role as LL.M. graduates when we are back in our home countries? How can we apply ethics, principles and values we have learned toward changing the world?” Sanchez Labrador says he has big plans to change his native Mexico, if not the world. Politically active since a teenager, he says he will return to work for the Institutional Revolutionary Party (PRI) during the next general election cycle with the goal of one day leading his country as president.

In fact, it was while Sanchez Labrador was working as an advisor for Mexican President Enrique Peña Nieto that he met former U.S. Vice President Joseph R. Biden L’68. Sanchez Labrador says he mentioned to Biden that he would like to study law in the U.S., and “Biden literally stopped in his tracks and said, ‘Syracuse is your only option!’ You don’t get that kind of advice every day from an American Vice President.”

“The master’s degree has been a wonderful experience, with great people and a great community,” says Linda Gitonga LL.M.’17, a Kenyan native who is beginning an Internship at the World Bank before taking up a fellowship with the Center for Reproductive Rights. “The students were able to learn from each other and we shared our backgrounds, experiences, cultures and sometimes even food from back home! The alumni community has been amazing for us also. It’s great to see that the college has so many alums for us to network with, and their success is an inspiration.”

Aisenberg obtained his LL.B. from the Universidade do Estado do Rio de Janiero, in Brazil in 1993. He also received a master of laws from the same institution in 2004. Since 2002, he has been a lecturer and professor of civil procedure and civil law at Itauna University. He plans to stay in the United States for another year through Optional Practical Training with the future goal of taking the New York bar exam and practicing immigration law.

Aljaro is a recipient of the LL.M. Fellowship offered by the Open Society Foundation’s Palestinian Rule of Law Program. He obtained his LL.B. from the University of Palestine at Al Zahra in the Gaza Strip. Since completing his undergraduate studies, he has worked with the Norwegian Refugee Council, the Palestinian Center for Democracy and Conflict Resolution and the Legal Aid Clinic at the University of Palestine. After graduation, he will focus on working with NGOs and legal clinics that concentrate on human rights issues in the Gaza Strip, especially on empowering women’s rights programs and initiatives. He is also considering further advancement in his educational journey.

Aljaroudi obtained her LL.B. from King Abdulaziz University (KAU) in Saudi Arabia in 2013, where she was a top-ranked student in her graduating class. At KAU, Aljaroudi was a founding member of the law club, worked as a trainee lawyer in a private law firm and worked pro bono with the organization Right to provide legal advice regarding claims and the right way to raise them. Upon graduation, Aljaroudi will return to her home country to receive her license before continuing her academic studies abroad.

Alotaibi obtained his LL.B. from King Saud University in 2010. Since that time, he has worked as a legal investigator and lead public administrator for legal affairs with the Ministry of Transportation in Saudi Arabia. In his role, Alotaibi drafted legal memoranda and represented the ministry in local councils and meetings. He plans to start his own law firm following graduation.

Alsufyani obtained his LL.B. from King Abdulaziz University in Saudi Arabia in 2014. He worked as a legal researcher for a technology and communications company in Riyadh before coming to the United States to improve his English. Alsufyani will continue his education by pursing a Ph.D. in commercial law.

Bernal is a citizen of the United States who obtained his LL.B. from Pontificia Universidad Catolica Madre y Maestra, in the Dominican Republic in 2015. While pursuing his undergraduate legal studies, he worked as a paralegal in a private law firm specializing in corporate and commercial law. Upon graduation, Bernal plans to further his studies specializing in corporate finance with the goal of eventually starting his own private practice.

Gitonga graduated with an LL.B degree from Moi University in Kenya in 2015. She has had various experiences working in civil litigation and drafting documents. She interned for the New York State Division of Human Rights during the summer and is excited to start an internship with the World Bank’s Doing Business Project after graduating.

Maroof is a citizen of the United States who obtained his LL.B. from the University of Kirkuk in 2008. While pursuing his legal studies, Maroof worked within the U.S. Department of State as a personal linguist with the U.S. Embassy officials in Iraq. After graduation, he plans on taking the New York Bar Exam and will practice in the fields of criminal defense and immigration.

Sanchez Labrador obtained his LL.B. from the Universidad Anahuac in Mexico in 2016. While in his undergraduate program, he performed thesis research on the Legitimacy of Proportional Representation in Mexican Parliamentarism. He also has a specialty in constitutional law and human rights from his alma matter and has earned certificates in tax regulation and conflict management. After graduation, Sanchez Labrador plans to return to Mexico to work as a lawyer in the public sector to improve the legal system with ethical principles and values so that corruption and impunity are reduced. In further service in the public sector, his professional goal is to become president of Mexico.