Life’s Refrain: Standing Up for the Underdog

Every morning, Thelma Guenther Bonzek ’43 sits down at the upright piano in her sunny Syracuse home and plays a few songs. She pounds out the notes and sways to the music, nodding her head to keep time. At 5 p.m., she plays a few more pieces, bracketing her day with music and memories. 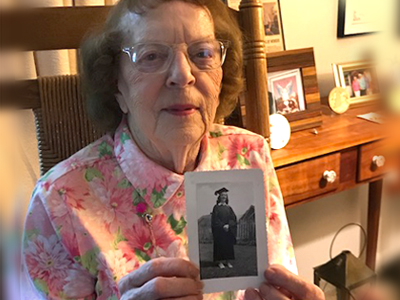 “I love to play, and I can read anything,” she says as she plays “How Great Thou Art.” “I don’t like recitals, but I like to play for people’s enjoyment,” she adds.

Now 94, she spends much of her time reading, knitting and entertaining visitors in the home built by her husband, Joe. Bonzek has lived in the neighborhood since 1929, when her family moved to Syracuse’s West Side.

She and her late brother, Paul Guenther ’39, graduated from Syracuse University. They were children of the Depression, coming of age between the world wars. Her parents—a seamstress and a carpenter—graduated from high school and taught them the value of a dollar. “They wanted us both to have a college education to have a better life,” she says.

Bonzek displays her first-grade report card: nothing below 90. She later skipped part of fourth grade. “I was smart,” she says matter-of-factly. Growing up, she played golf, baseball and tennis, winning a 1941 city park tennis championship. In high school, she took a journalism course and became sports editor of the school paper–the first girl to do so.

“I was a feminist before my time,” she says. “I thought I was equal to any boy or man. I could hit the ball farther than the boys.”
It was the piano that first led her to Syracuse University, and it’s the piano that provides rhythm and comfort in her tenth decade. She started playing at age 7, practicing for an hour before school. In those days of pinching pennies, her mother bought three sheets of music for a dollar. “I learned classics and pop music,” she says. 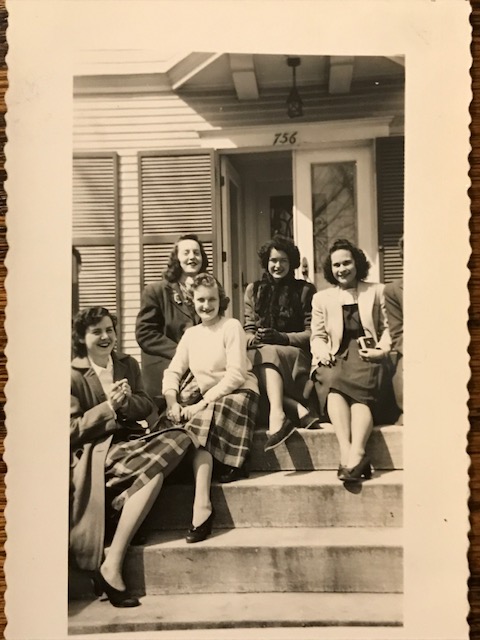 Bonzek, second from left, with some of her sorority sisters

When she was a high school junior, Bonzek’s skills surpassed her teacher’s. Her mother signed her up for piano lessons at Crouse College. “I would walk from Central High School to the University,” she says. “I walked up Adams Street and turned on Crouse.”
A few years later, she enrolled at Syracuse as a piano major; worried about supporting herself as a piano teacher, she also took courses in music education.

“Everyone who lived in the city and went to college, went to SU,” she recalls. “You didn’t go out of town. You lived at home. No one had a car. No one had credit cards or checks.” She remembers tuition costing $200 for the fall and $175 for the spring semester.

Despite worries about World War II, Bonzek remembers the era as an elegant time. “You dressed up to go downtown,” she says. “It was absolutely beautiful and had so many beautiful shops.”

She joined Theta Phi Alpha sorority, then at 756 Comstock Ave.; Sigma Alpha Iota, a musicians’ honor society; and a women’s athletic organization. “We had more fun,” she says, paging through yearbooks. “We had so many good times.”

Still, she was practical, knowing she’d have to earn a living. “You got a job because you needed money,” she says. “No one talked about a career.”

While she was in college, her brother served in the Army. He and a friend, Joe Bonzek, were recovering from malaria in Sicily in 1943 when Joe spotted her photo. He asked Paul if he could write to his sister. The two corresponded for two years before Joe visited Syracuse; they married in 1946.

Thelma started working right after graduation, teaching music in Chenango Forks, near Binghamton, and in Skaneateles. She taught piano at home while raising their three children. After they were grown, she returned to Syracuse University for graduate courses in education, then taught kindergarten at Seymour School for 15 years.

“I loved it,” she says. “They were wonderful parents and wonderful kids. They just needed some love.”

In her opinion, every classroom needs a piano. “It’s the answer for children who have emotional needs,” she says. “You can sing, you can dance, you can teach math with it. It’s another way to connect with kids.”

One chapter of her life is immortalized in Sean Kirst’s “The Soul of Central New York” (SU Press, 2016). Kirst, a former Post-Standard columnist and University publications writer, described how Thelma helped her husband locate the survivors of Jesse Gallardo, a fellow soldier killed on a French mountainside during World War II. Years later, the Bonzeks traced Gallardo’s brother, Francis, to an Ohio nursing home, and explained–in “an emotional phone call”–the circumstances of his brother’s death.

Joe, Thelma’s best friend, died in 2012 at age 91. Since then, she finds solace in journaling and playing the piano. 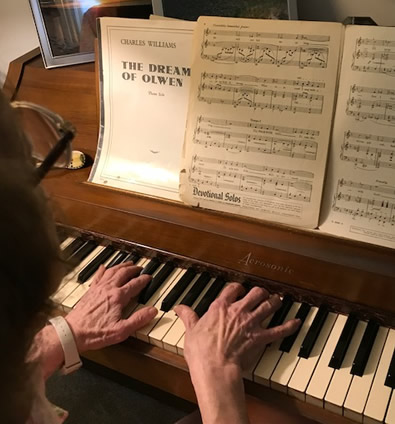 She credits her husband with teaching her why some children act out. “He grew up dirt poor. He only knew Polish as a child and was teased by his classmates,” she explains. “He helped me to understand that if you’re hit at home, the first thing you want to do is hit people.”

She’s proud of a lifetime “standing up for the underdog” and respecting people—even the most difficult students–as individuals. “I feel good I’ve been able to help people,” she says. “I get down on my knees every day and I hope I can do something to make other people happy. I still stand up for people. Somebody has to.”

Bonzek looks around her living room and nods with satisfaction. She’s lost her parents and brother, her beloved Joe, friends and sorority sisters. But her heart and home still overflow with memories of all that she loves. Including her piano.