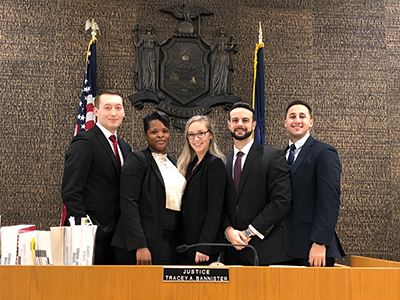 The team of second- and third-year students made it to the final four of  the Buffal-Niagara Mock Trial Invitational in mid-November.

On Nov. 9-11, the National Moot Court Competition team of  third-year students Anna Pinchuk and Erin Shea and second-year student Erika Simonson participated in the Boston Regional round of the New York City Bar’s national appellate competition. The team advanced to the semifinal round and brought home the award for Best Brief. The team is coached by Professor Richard Risman, who was assisted by David Katz ’17.

Coached by Professor Yelena Duterte, a second-year team of Olivia Fontana and Ryan Harrison advanced to the quarterfinals in the College of Law’s first-ever appearance in the National Veterans Law Moot Court Competition in Washington, D.C., which took place from Nov. 4-5. The team lost in the Elite Eight round in a split decision.

In another first-time appearance for the college, the Judith Kaye Arbitration Competition team returned from New York City on Nov. 12 with two awards. The second-year team of Sophie Bober, Sarah Knickerbocker and Ursula Simmons brought home trophies for Best Cross Examination and Best Brief. James Sonneborn and Casey Johnson of Bousquet Holstein PLLC coached the team. This competition is sponsored by the New York State Bar Association and the American Arbitration Association.

For more information about the College of Law’s award-winning moot court and advocacy programs, click here.