Samuel Johnson has joined the College of Arts and Sciences as the newest faculty member of the Department of Music and Art Histories.  He is currently teaching the history of photography, but his research on the art of the Russian and Soviet avant-gardes offers a new facet of expertise to the department. 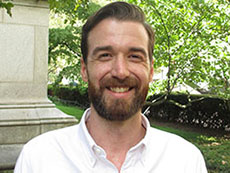 “Chronologically, we’re missing this era in our department and for art history, we need that continuity,” says Romita Ray, associate professor and chair of the department. “But this is also brings a new dimension and an exciting new colleague to the department. Professor Johnson’s research takes us into a new geographic area that has a deep impact on the arts and the world.”

Johnson, assistant professor of art history and Carole & Alvin I. Schragis Faculty Fellow, comes to Syracuse University from the Met Museum after completing his post-doctoral Leonard A. Lauder Fellowship in Modern Art.

His research focuses on the avant-garde Soviet and Russian art that spans from 1917 to the mid- to late 1930s. This time period was at the start of the Russian Revolution that overthrew the Czarist regime until the Great Terror when Stalin imprisoned and ordered the death of the elite and general members of society.

Johnson characterizes this period as a radical change in Russian society and artists wanting to shape the change in society.

“Artists were caught up in a broad societal transformation. They were engaged in politics and making art relevant to the public. They wanted to take art away from the gallery wall and away from the homes of the elite,” says Johnson. “It was to be part of everyday life that was accessible to everyone.”

Johnson received his Ph.D. in the history of art and architecture from Harvard University in 2015 after completing a dissertation on the printed oeuvre of El Lissitzky. He is currently completing revisions on a book manuscript on Lissitzky, provisionally titled “El Lissitzky on Paper: Print Culture, Architecture, Politics, 1919–1933,” which treats the artist’s theoretical and practical engagement with print culture as an alternative trajectory of the production-art paradigm outlined by Soviet theorists in the mid-1920s.

Johnson explains that Lissitzky was trained as an architect but developed his talents into also producing abstract paintings, book designs and experimentations with photography.

“He was interested in changing the norms of what was considered art, and eventually found a way to use the illustrated press to create a connection between photographs and text in dynamic compositions,” says Johnson.

Johnson says that during this period many artists were involved in what today’s audience would call propaganda. However, Johnson said, the artists during this time of major social upheaval and change wanted “art to be engaged in politics while making it relevant to the public and advocating for radical social change.”

Johnson is currently teaching the history of photography for the department and Ray says that she expects him to be able to connect with the many different collections and departments on campus that touch on photography.

“He’s also a really nice chap,” says Ray. “He’s sociable, approachable and a very caring teacher. Not only does he come with an excellent research background, he also meshes well with our faculty and students both within the department and the SU community. I look forward to seeing him chart new paths of teaching and research as his career progresses at Syracuse. We are excited to have him among us.”