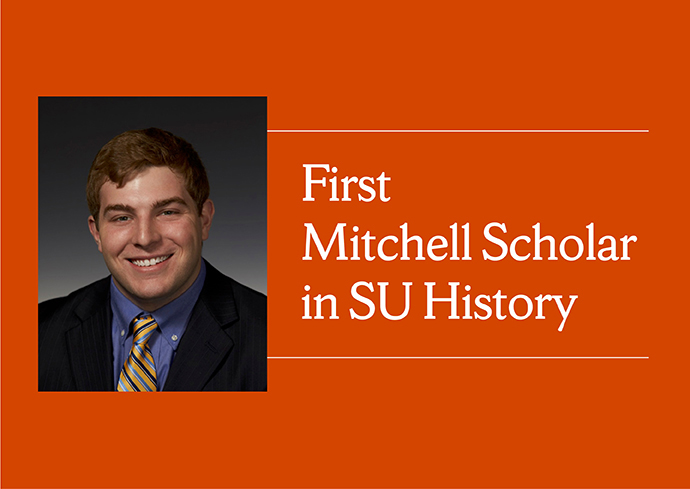 Cameron MacPherson ’16, a graduate student in Pan African studies in the College of Arts and Sciences, has been named a recipient of the prestigious George J. Mitchell Scholarship for graduate study in Ireland. He is Syracuse University’s first Mitchell Scholar. MacPherson is one of only 12 U.S. students selected from more than 300 applicants for the award this year. He will use the award to study intercultural theology at Trinity College, Dublin.

“Cameron’s extraordinary combination of scholarly, philanthropic, athletic and literary accomplishments made him an outstanding candidate for the Mitchell Scholarship,” says Jolynn Parker, director of CFSA. “His passion for understanding cultures different from his own, combined with his commitment to social activism, will ensure that he makes the most of this opportunity. I can’t imagine a student better suited to represent Syracuse University, and the U.S., in Ireland.”

“We congratulate Cam on being named a George Mitchell Scholar,” says Syracuse Director of Athletics John Wildhack. “He is a deserving recipient of this very prestigious award. During his undergraduate studies at Syracuse, Cam excelled in the classroom, contributed greatly to our campus community and was a leader on the Syracuse football team.”

The Mitchell Scholarship Program, named to honor former U.S. Sen. George Mitchell’s pivotal contribution to the Northern Ireland peace process, is an initiative of the U.S.-Ireland Alliance. The award is designed to introduce and connect future American leaders to the island of Ireland and recognize and foster intellectual achievement, leadership and a commitment to community and public service. The Mitchell Scholarship Program provides tuition for one year of graduate study at an institution in Ireland, accommodations, a living expenses stipend and an international travel stipend.

MacPherson will enroll in a one-year master’s of philosophy program in intercultural theology and interreligious studies at Trinity College. MacPherson has studied refugee resettlement, particularly with Congolese populations, since he was an undergraduate. “Over the years, I have learned the crucial role that faith and religion play in migratory communities. Religious spaces not only create shared cultural experiences that perpetuate a distinct identity, but also enable the exchange of knowledge among newcomers to assist with integrative outcomes,” he says.

At Trinity College, he will examine the dynamic processes that shape religion as a cultural identity and analyze the social role of faith in migratory communities. “Studying in Ireland will provide a unique perspective on how religion can be used to promote social cohesion and peace in the face of conflict, which often shape the cultural practices of refugees and other forced migrants,” he says. MacPherson plans to create multimedia scholarship—including documentary film—as he investigates his research questions and their implications.

“I think there is a lot more to resettlement and migration than meets the eye. While we tend to think of resettlement as the domain of governments, a whole host of institutions—from faith-based nonprofits to churches and mosques—determine the ways newcomers enter into society,” MacPherson says. “Understanding the basis of common experience and interaction allows decision-makers to leverage community partners, empower grassroots activists and lead to better outcomes for resettled refugees that are respectful not only of human rights, but also of human needs for belonging, community and culture.”

This past summer, MacPherson conducted research on grassroots social organizations in Boston’s Congolese community and served as a case manager at a Congolese Development Center. He has also interned with Sen. Kirsten Gillibrand’s office to learn more about public policy and refugee issues. A spoken word poet, he volunteers with Writing Our Lives, a creative literacy program for local middle school students, leading poetry workshops and units in oral history and journalism.

MacPherson received a bachelor’s degree from Syracuse in 2016 in international relations from the College of Arts and Sciences and the Maxwell School of Citizenship and Public Affairs and in television, radio and film from the S.I. Newhouse School of Public Communications. As a student-athlete, he earned CoSIDA Academic All-America First Team honors for his academic accomplishments and athletic contributions to the football team.

“Since I was young, my family has impressed on me the importance of looking outward rather than inward, of ensuring that the actions I take, both big and small, make my little world a better place. My grandfather lived this creed through many small services that ranged from brightening people’s days to changing their lives. My mother taught her children the importance of empathy and selflessness through a lifetime of caring, quiet kindness,” MacPherson says. “If I contribute to the world or make some positive impact, then I know that I will have reflected the best lessons my family has taught me. I hope that the Mitchell Scholarship is the next step in actualizing these lessons.”

MacPherson says he could not be more excited at being named a Mitchell Scholar. “Meeting past winners and the other finalists made me realize what an exceptional community is created around this scholarship,” MacPherson says. “I am thrilled to join this group of people who have both the capacity and the conviction to improve the world. My cohort of fellow scholars are incredible people, and I cannot wait to get to know them better and spend a year in Ireland with them.”