When poet Stephen Kuusisto decided to train with a guide dog at age 39 he had no idea the decision would change every aspect of his life. “It was amazing to find out what a dog can do,” he says. “That’s why I wanted to describe the experience in a new memoir.” The book, titled “Have Dog, Will Travel: A Poet’s Journey” will be published by Simon & Schuster in March 2018. 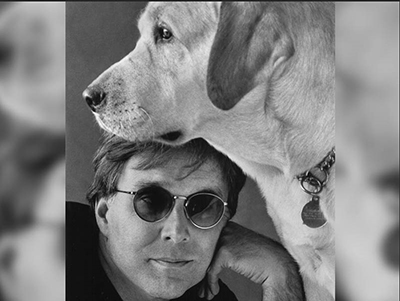 Kuusisto, now a University Professor in Cultural Foundations of Education in the School of Education and a faculty member in the Renee Crown Honors Program, attended college at Hobart and William Smith Colleges, where his father was the president. On that small campus, he was able to memorize how to get to all the places he needed to go.

“In those days I didn’t want people to know how little I could see,” he says, noting it’s not unusual for blind people try to pass as sighted long after their vision has become compromised. After college he attended the Iowa Writer’s Workshop in Iowa City where he painstakingly memorized every step he had to take between his apartment and the creative writing program. “I was steadfast in my denial,” he says, “even to the point of absurdity. I didn’t think anyone would take me seriously if I revealed my disability.”

After earning a graduate degree from the University of Iowa, he returned to Hobart and William Smith to teach, where he continued to maneuver by memory. All was well until, without notice, he lost his job.

Suddenly, he needed a new way to navigate the world. He dug out a pamphlet he had been given from Guiding Eyes for the Blind, a guide-dog school near New York City, and called them.

Kuusisto found that getting a guide dog is a long process. First he had to demonstrate his skills in getting around by himself with a white cane. Then he had to wait months for a spot at the school. And then the real work began. At Guiding Eyes for the Blind he first attended lectures about what a dog can do. After a few days, he was given his own dog—Corky.

In “Have Dog, Will Travel” he recalls the moment he first met Corky like this: “Corky burst in like a clown. I sat in a tall armchair and Kylie [the trainer] told me to call and damned if he didn’t run full steam into my arms. She placed her large front paws on my shoulders and washed my face and then, as if she fully understood her job would require comedy, she nibbled my nose.”

“There have been other books about going to guide dog schools and getting a guide dog,” Kuusisto says, “but it seemed that no one had written a literary book about guide dogs—one where the writer has a degree of self-awareness and irony about his circumstances.” He says many books that have been written about getting a guide dog haven’t dealt with how the process felt on the inside.

He talks about how Corky pushed him to be braver, more accepting and more self-aware—“a more spiritually confident person.” He also talks in the book about how she made him more outgoing because people he encountered were eager to talk about his dog. In one incident he recounts, a diner owner starts a conversation with him about Corky. “This was the life I’d always wanted: being out and about, engaging in casual talk,” Kuusisto says.

“Have Dog, Will Travel” portrays how the process of training for a guide dog and actually incorporating Corky into his life changed Kuusisto in major ways, spiritually and psychologically. It’s not a book he could have written at the time the events happened, Kuusisto says. “I needed to be older and more experienced to write this book.”