The Maxwell School has named two graduate students as the inaugural Otey and Barbara Scruggs Graduate Scholars:  John R. Barruzza, a Ph.D. candidate in the history department; and Chelsea M. Thomas, a student in the master of public administration (M.P.A.) program. 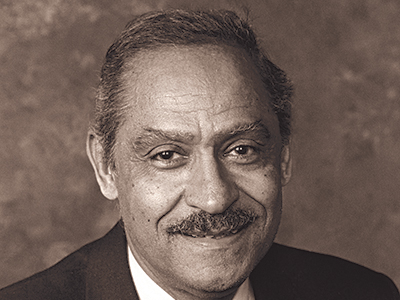 The scholarship was established in the spring of 2017 in honor of the late Otey Scruggs, who served on the Maxwell School faculty for more than 35 years, and his widow, Barbara Scruggs. The fund was endowed by the Scruggs’ son, Maxwell Advisory Board member Jeffrey Scruggs, and his wife, Robbin E. Mitchell, as a testament to Scruggs’ lifetime commitment to Syracuse University and the Maxwell School.

“The Otey and Barbara Scruggs scholarship is a fitting tribute to a treasured member of the History Department and his wife,” says Associate Professor and Chair of History Norman Kutcher. “Otey cared deeply about the University generally and the History Department especially. Graduate education grew substantially in strength and numbers under his leadership, so it is fitting that this scholarship will benefit our most deserving graduate students.”

Otey Scruggs was an award-winning professor of history from 1969 until his retirement in 1995. Having done early research on Mexican farm workers, Scruggs later was a pioneer in the field of African-American history. He wrote a biography of 19th-century priest and black abolitionist Alexander Crummel, titled “We the Children of Africa in this Land.” His publications also include “Braceros, ‘Wetbacks,’ and the Farm Labor Problem: A History of Mexican Agricultural Labor in the U.S., 1942–1954.”

Barruzza earned an M.Phil. in history from Syracuse University in 2016, an M.A. in history from Villanova University in 2012 and a B.A. in history and psychology from Rutgers in 2010. Currently, he is pursuing a Ph.D. in history at the Maxwell School, expected in 2019. In addition to the Scruggs scholarship, he has been awarded several grants for his scholarship and research, including a European Holocaust Research Infrastructure Fellowship (2018), the Dean’s Summer Research Grant (2016) and an award from the Roscoe Martin Fund (2016). His dissertation is titled “From Mass Murder to Memory: Milano Centrale and the History of Anti-Semitism in Italy, 1931-2017.”

“Ms. Thomas is a promising student and we are very pleased to have her as part of our M.P.A. family,” says Chair and Professor of Public Administration and International Affairs Robert Bifulco.