The Syracuse University Singers traveled to Louisiana in early November to perform at the seventh Biennial National Conference of the National Collegiate Choral Organization (NCCO) in Baton Rouge. 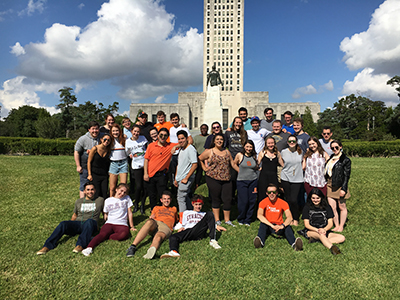 The University Singers visit the Louisiana State Capital during their trip to Baton Rouge for the seventh Biennial National Conference of the National Collegiate Choral Organization.

The choir, which performs under the direction of John Warren, associate professor and director of choral activities in the College of Visual and Performing Arts’ Rose, Jules R. and Stanford S. Setnor School of Music, was selected to perform by the NCCO after submitting an audition comprised of the proposed program and recordings of live performances from the last two years. The program, titled “Le Monde Français,” featured “Revecy venir du Printans” by Claude Le Jeune, “Sept Chansons” by Francis Poulenc and “Dominus Vobiscum” by Sydney Guillaume.

After the performance, Warren received numerous congratulatory emails and remarks from audience members, including colleagues from other colleges and universities who used such words as “exquisite,” “elegant” and “stunning.”

“I am so immensely proud of University Singers’ performance at the NCCO conference,” says Warren. “They sang a very difficult program from memory and at an amazingly high level of expression and nuance. To receive the response from such a distinguished national audience has been beyond gratifying.”

While in Louisiana, the group also performed at First United Methodist Church in the city of Slidell, where Setnor School of Music and School of Education alumnus Nathan Sumrall G’09 G’11 serves as organist/accompanist, and Northshore High School, where Sumrall is the choral teacher.

For more than 50 years, the University Singers has upheld a rich tradition of excellence in choral singing characteristic of the most select vocal musicians of the Setnor School of Music. Known for its sensitivity to detail and musicianship, the choir delights in its diversity in repertoire.

In May 2015, the University Singers won the Grand Prix de Ville de Tours in the Florilège Vocal de Tours, an international competition in Tours, France, and competed as finalists in the European Grand Prix for Choral Singing in Varna, Bulgaria, in May 2016. The choir has been invited to sing for multiple conferences of the American Choral Directors Association, including its appearance at the 2014 Eastern Division Conference in Baltimore. Additionally, the choir has toured throughout the Eastern United States and Canada.

University Singers is comprised of 32-40 undergraduate and graduate students from a variety of disciplines and regularly performs with professional orchestras in Syracuse. Recent masterworks include the Requiems by Brahms, Fauré and Verdi; Beethoven’s 9th Symphony; Mahler’s 2nd Symphony; and Haydn’s “The Creation.” The choir’s first CD, “Mysteries and Wonders,” is available on iTunes and Amazon.com.