Syracuse Symposium continues its yearlong look at “Belonging” with a keynote event featuring a trio of acclaimed Black feminist scholars. 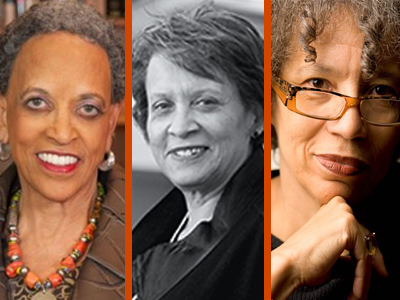 Free and open to the public, the program will conclude with a reception and book sale. American Sign Language interpretation is provided. For more information, contact the Syracuse University Humanities Center in the College of Arts and Sciences (A&S) at 315.443.7192, or visit humcenter.syr.edu.

Each presenter is a distinguished educator, scholar, activist and administrator. Cole—director emerita of the Smithsonian Institution’s National Museum of African Art and former president of Spelman and Bennett colleges—is a senior consulting fellow of the Andrew W. Mellon Foundation and a principal consultant with Cook Ross.

Giddings is the Elizabeth A. Woodson 1922 Professor Emerita of Africana Studies at Smith College.

Guy-Sheftall is on the faculty of Spelman, where she is the Anna Julia Cooper Professor of Women’s Studies and founding director of the Women’s Research and Resource Center (WRRC).

“We are honored to welcome these luminaries for a conversation about combating injustice and creating change,” says co-organizer Vivian May, director of the Humanities Center and professor of women’s and gender studies in A&S. “All three are remarkable intellectuals whose generous leadership, meticulous research and deep commitment to collaboration and instituting change have transformed the scholarly landscape.”

May credits members of the trio, individually and collectively, for documenting a “long and robust Black feminist intellectual tradition,” and she underscores how their “deeply felt collaborations” have impacted many.

“As a community, we are fortunate to engage with all three visionaries together,” she continues. “They will draw on their collective expertise and shared commitments to show how ‘lessons’ from Black feminist histories affect personal, institutional and political change.”

The event is co-presented by the Maxwell School of Citizenship and Public Affairs, with a generous gift from University Trustee Christine Larsen G’84, and by the new Universitywide Council on Diversity and Inclusion (CDI). 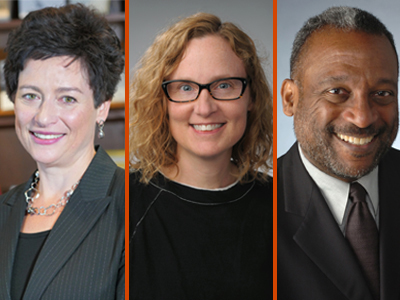 Vivian May, Carol Faulkner and Barry L. Wells, from left

Co-organizer Carol Faulkner notes the timing of the event, which coincides with the centennial of women’s suffrage in New York State—a movement that has had myriad social, economic and political consequences.

“It is hard to think of three women who have had greater impact on their academic disciplines and on higher education, more broadly,” says Faulkner, associate dean and professor of history in the Maxwell School. “They are public intellectuals whose pioneering careers demonstrate the tremendous impact that Black feminists have made—and continue to make—on American public life. I eagerly anticipate their conversation, which will offer important perspectives on the history and contemporary challenges of the ongoing struggle for racial and gender equality.”

Adds Barry L. Wells, special assistant to the Chancellor and co-chair of the CDI: “This event is designed for men and women, in hopes of advancing a vision of racial justice. Only by understanding the intersections of race, gender, sexuality and social class can we unpack the mechanisms by which inequalities manifest. Our esteemed scholars will consider how these dimensions of difference can become sources of identity and collective action.” 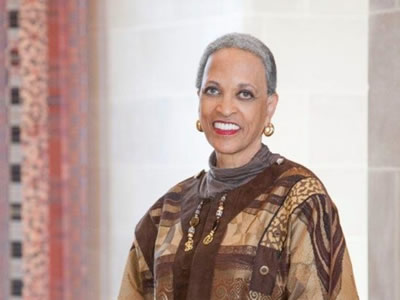 Cole has enjoyed a long, distinguished history in higher education and the arts. In March 2017, she retired as director of the Smithsonian National Museum of African Art, where, during her eight-year tenure, she embarked on a series of groundbreaking exhibitions and education programs, and established the first chief diversity officer position at a Smithsonian museum.

The only person to preside over both of the nation’s Historically Black Colleges for women, Cole became Spelman’s first African American woman president in 1987. During her 10-year appointment, Spelman was named the South’s top liberal arts college. From 2002-07, Cole led Bennett College, where she launched, among other things, an Africana women’s studies program.

Cole is professor emerita at Emory University, where she retired as a Presidential Distinguished Professor. She also has held teaching and administrative positions in anthropology, women’s studies and African American studies at the University of California, Los Angeles; Washington State University; the University of Massachusetts Amherst; and Hunter College. Cole has written or edited numerous publications for scholarly and general audiences, including several with Guy-Sheftall.

The recipient of nearly 70 honorary degrees, Cole is a fellow of both the American Anthropological Association and the American Academy of Arts and Sciences (AAAS). She has served on many boards, including that of the United Way of America, of which she was the first African American chair. Cole currently co-chairs the American Alliance of Museum’s Working Group on Diversity, Equity, Accessibility and Inclusion, and serves on the board of Martha’s Table. She earned a Ph.D. from Northwestern University. 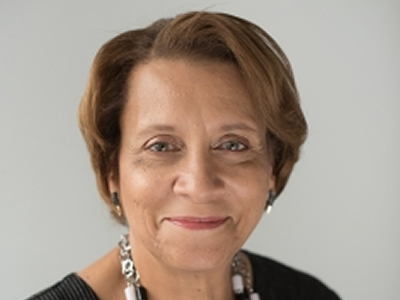 Giddings specializes in the social and political histories of African American women. Her best-known book is “Ida: A Sword Among Lions: Ida B. Wells and the Campaign Against Lynching” (HarperCollins, 2008). “Ida” won a Los Angeles Times Book Prize; was a finalist for a National Book Critics Circle Award; and was one of the year’s best books, according to The Washington Post and Chicago Tribune. Toni Morrison, a Nobel Prize- and Pulitzer Prize-winning American novelist, has called it “history at its best—clear, intelligent and moving.”

Giddings also wrote the acclaimed books “In Search of Sisterhood: Delta Sigma Theta and the Challenge of the Black Sorority Movement” (1988) and “When and Where I Enter: The Impact of Black Women on Race and Sex in America” (1984), both from HarperCollins.

A former book editor at Random House and Howard University Press, Giddings is a member of the founding advisory board of the interdisciplinary journal Meridians: Feminism, Race, Transnationalism (Smith College). She also has worked as a magazine editor and journalist, having regularly contributed to The New York Times, The Washington Post and The Philadelphia Inquirer. During the ’70s, Giddings was the Paris bureau chief for “Encore American and Worldwide News,” and was a member of the press corps for President Carter’s first trip to Europe, India and the Middle East.

Prior to Smith, Giddings held faculty positions at Spelman and at Rutgers, Duke and Princeton universities. She earned a B.A. from Howard University, and, last year, was named an AAAS Fellow. 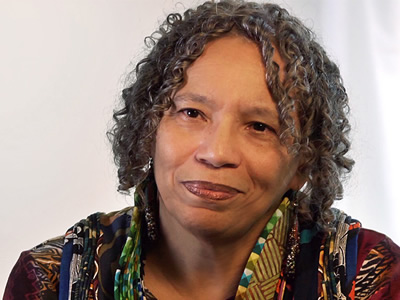 Guy-Sheftall is a prolific scholar widely known for editing “Words of Fire: An Anthology of African-American Feminist Thought” (The New Press, 1995), a 200-year anthology and history of black feminist theory, and for co-editing with Roseann Bell and Bettye Parker “Sturdy Black Bridges: Visions of Black Women in Literature” (Doubleday, 1979). Both volumes are among the first of their kind in academia.

After enrolling at Spelman at age 16, Guy-Sheftall earned a master’s degree from Clark Atlanta University and Ph.D. from Emory, where she has been an adjunct professor in the Department of Women’s, Gender and Sexuality Studies. Since joining Spelman’s faculty in 1971, Guy-Sheftall has founded WRRC, the college’s first women’s studies program and SAGE: A Scholarly Journal on Black Women—all firsts for a historically Black college for women.