With NYSSTLC’s Help, Heatsleeve Is Heating Up Prosthetic Devices Market

The last straw for Bryan Costello came one bitterly cold winter morning. Having lost part of his right leg in a motorcycle accident in 2011, Costello was now employed plowing driveways instead of working as a pipefitter for a nuclear plant in Upstate New York. On that particular 10ºF morning, his carbon fiber prosthetic—fitted snugly below the knee—“was really sucking in the cold, and I said to myself, ‘Are you kidding me?!’” Like many amputees, Costello suffers from circulation issues, numbness and pain in his stump. Now the cold was biting hard. “After that, I went to my doctor and said, ‘So, where’s the heat?’ They didn’t know what to tell me.” 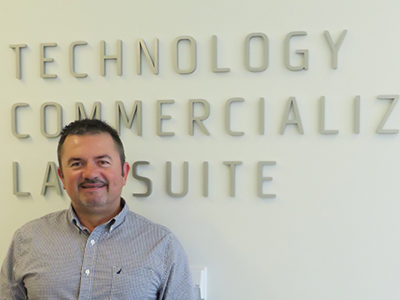 When he learned there are no warming solutions for amputees suffering from bad circulation, pain and cold, Costello, a Liverpool, New York, resident, began tinkering at home. First, he rigged up a small heating pad and applied that to his stump. It gave him immediate relief. This jury-rigged solution lead Costello to create a cup-like heating device to fit over his stump, rigged to a large battery. Thus, the Heatsleeve was born. Now—a few years later—Costello Prosthetic Warmers LLC is winning start-up competitions, creating buzz and, thanks to assistance from the College of Law’s New York State Science and Technology Law Center (NYSSTLC), beta-testing advanced prototypes with organizations such as military veterans-oriented The Heroes Project.

Costello says his former career as a pipefitter helped him figure out the problem of how to deliver heat through a carbon fiber prosthesis. “Prosthetic limbs are just like pipes,” he says, explaining that pipefitters at a nuclear plant know only too well how cold and heat flow through a duct system. Costello also uses a plumbing analogy to explain one of the main sources of discomfort for an amputee. “When a limb is gone, your circulation becomes slowed, like in a steam pipe when a loop is cut,” he explains. “Amputees have horrendous circulation issues. We really suffer. But heat helps.”

The current Heatsleeve prototype is a stretchable Kevlar sleeve that either wraps around the socket of a prosthesis—without adding bulky wiring, obstructions or weight—or directly around a stump. The sleeve’s embedded wires heat up via an exterior battery that sits in a pocket. The amount of heat supplied is adjustable: the sleeve can be hot if worn around the carbon fiber socket or just warm if worn next to skin—a simple, lightweight and portable solution. Costello says that in an early market research survey of amputees, there was overwhelming interest in this form of relief.

However, “the business stuff wasn’t part of my world,” notes Costello, referring to the process of taking his idea from the workbench into the marketplace. “But I’ve got some great mentors, and I know a lot more now than when I started.” In fact, Costello’s acumen has taken him as far as the 2017 Medical Device Innovation Challenge (MDIC), organized by Upstate Medical University’s CNY Biotech Accelerator. One of seven companies selected by the MDIC Review Committee, Costello Prosthetic Warmers received access to free space in the Upstate MIND Creation Garage, consultations with business experts and other mentorship resources.

One of the mentors Costello met through MDIC is Jack Rudnick, NYSSTLC director and a member of the MDIC Review Committee. Through Rudnick and the law center, Costello has been introduced to further Syracuse University resources for entrepreneurs. Engineering and industrial design students, for instance, are helping Costello refine his latest Heatsleeve prototype. Among other improvements, they are working on reducing the size and extending the life of the battery that works with the Kevlar sleeve. “The current battery is about the size of a pack of cards and can supply power for about eight hours,” says Costello.

“One of the services the law center provides is that we can introduce a tech startup client to relevant and helpful partners that we have across the Syracuse University campus. They might not know about these resources otherwise,” explains Rudnick. “Our campus partners are open and willing to help. SU has tremendous resources, and it is one of our tasks to deploy them.” 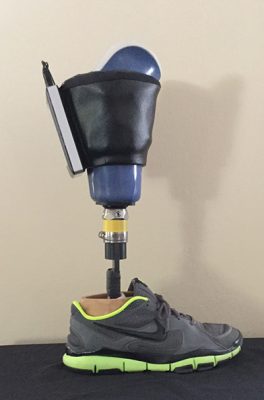 A prototype of the Heatsleeve

“I’ve got great collaborators around me, and the learning aspect has been exceptional,” says Costello, referring to his experience working with the law center and University. “I couldn’t have done this without the University’s help. There is a real process to go through when developing a product, and many people never make it.”

Helping Costello succeed further, NYSSTLC has also provided market, regulatory and intellectual property (IP) landscapes for Heatsleeve, and with this knowledge—and US Patent #US9610178B2—in hand, Costello is confidently pitching to investors and seeking out partnerships to beta test his invention.

“You can’t talk to investors without IP protection,” explains Costello. In October, Costello won a pitch competition in front of investors at MedTech 2017 DisruptNY competition in Buffalo, and he will meet with another investor at NYSSTLC this month. Meanwhile, Walter Reed National Military Medical Center and Syracuse University’s Institute for Veterans and Military Families have shown interest, and later this year The Heroes Project will provide Heatsleeves to injured war veterans that the not-for-profit is taking on a confidence-building expedition to Antarctica. “That testing will be important, to provide me with more feedback,” says Costello. “My prototype is very good, but there is more to come.”

Even as Heatsleeve heats up, Costello is developing more ideas to help amputees. And just like Heatsleeve, these new ideas have arisen from Costello’s own experiences, discomforts and frustrations (“We are still in the 18th century when it comes to prosthetics,” he says). For instance, currently on his workbench is a device to improve the movement of a prosthetic leg and one to aid recent amputees who are still recovering from their hospital stay and not yet fitted for a prosthesis.

Costello is approaching these new solutions with the same mix of systematic problem-solving, empathy for fellow amputees, determination and entrepreneurial spirit that he brought to Heatsleeve. “Without a positive direction, it’s hard to go anywhere,” he says. “I know why some entrepreneurs don’t go through with the process, but I’m ambitious.”