Ryan Bince, a 2017 graduate of the Department of Communication and Rhetorical Studies’ (CRS) master of arts (M.A.) degree program in the College of Visual and Performing Arts, has received the M.A. Thesis of the Year Award from the Master’s Education Division of the National Communication Association (NCA). 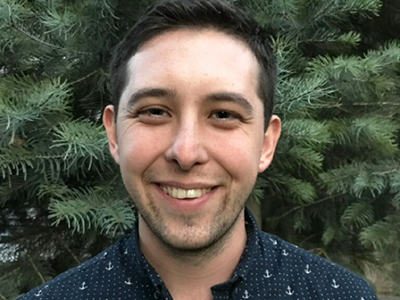 Bince’s thesis, “Getting out of the Basement: Space, Performance and the Oscillation of DIY Punk Publics,” was supervised by Professor Dana Cloud. The award will be presented at the NCA annual convention in Dallas this week.

Bince’s thesis looks at the communicative and collaborative networks that connect the international DIY punk scene, then investigates the overall significance of those networks for developing the activist potential of art communities. He outlines how networks like these can develop into massive international activist communities that use the engaging and accessible nature of art to develop and direct political consciousness.

“Ryan’s work has been provocative, clearly written, well argued and politically engaged,” says Cloud. “His case study chapters on the international punk festival PIX Fest and a punk house in West Virginia. He combines rhetorical-critical and ethnographic methods. The chapter based on interviews with residents of “Funky Towne,” the punk house in Huntington, is particularly beautiful. The interviews capture the desire to create a prefigurative democratic creative community as well as their commitment to succeeding. Ryan wanted to know whether and how such communities can contest the terms of life of neoliberal capitalism—privatized, atomized and austere. I won’t spoil the conclusion except to say that of course, the answer is complicated.”

This is the third time in the past four years that CRS M.A. students have won the NCA’s M.A. Thesis of the Year Award; previous winners include Joe Hatfield G’16 and Sarah Evans G’14.

Since completing his M.A., Bince has been working as administrative assistant to the dean at Syracuse University’s College of Arts and Sciences. Bince is currently writing applications for Ph.D. programs in rhetoric starting in Fall 2018.