“Wanderlust” explores how a variety of artists from the late 1800s until today have captured landscapes, either near or far, in order to give viewers a glimpse of diverse and varied places. Defined by the Photographic Society of America as an image that expresses the characteristic features or culture of a land as they are found naturally, with no geographic limitations, the genre of travel photography has intrigued artists since the dawn of photography in the 1830s. 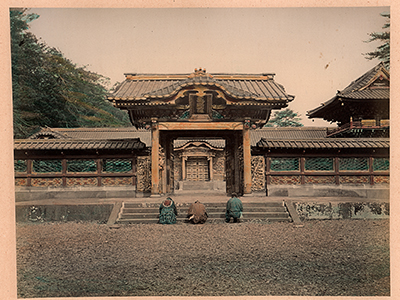 Before the invention of photography, images of traveled lands were created by the hand of a draftsman, painter or printmaker. The introduction of the daguerreotype by French artist and inventor Louis-Jacques-Mandé Daguerre in 1839 was the first successful photographic process. With that, the potential to capture on film a true, unaltered view of the world was now available, and, with it, endless possibilities appeared, sparking inspiration for artists.

True to expectations, the potential of the daguerreotype was highly popular. “Unfortunately, the large size of the cameras, not a lack of interest, hindered the ability of artists to travel while carrying their cameras and equipment,” says Emily Dittman, curator of “Wanderlust.” “As a result, the majority of 19th-century images were produced by professionals working for commercial studios. Employment in, or ownership of, a studio not only alleviated the cost of equipment, but also of the travel itself.”

Recognizing the potential for profit, photographers opened studios centrally located in tourist locations. This enabled them to take daily treks to photograph monuments, ruins and landscapes popular with the emerging tourist culture. The resulting images were produced, marketed and sold to interested clients in the form of single prints or albums.

Over the years, spurred by the invention of smaller cameras and shorter exposure times, the ability to photograph as one wandered became a reality for amateur photographers. At the same time as images continued to be produced commercially and marketed to travelers as souvenirs, technological advances provided both artists and everyday people the ability to bring home their own snapshots or albums.

“This resulted in a more personal side of travel photography,” says Dittman. “People could document their own paths and encounters to show family and friends a visual documentation of their travels. Today, travel photography continues its popularity, not limited anymore by size, ease or financial burdens as it was in the mid- to late-1800s. Smaller devices, many of which are based in smartphones and seemingly on every person at all times, truly enable one’s wanderlust impulses to explore the world.”