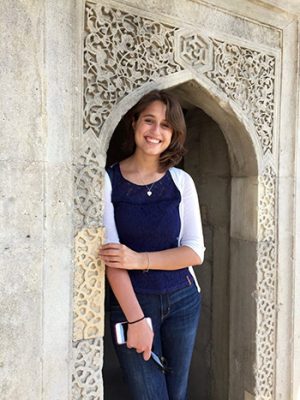 Giovanna Saccoccio spent this past summer learning Turkish in Azerbaijan.

Giovanna Saccoccio is a senior majoring in international relations in the College of Arts and Sciences and Maxwell School of Citizenship and Public Affairs and in public relations in the S.I. Newhouse School of Public Communications. Last spring, she earned a prestigious Critical Language Scholarship that allowed her to study Turkish intensively through an immersive experience abroad in Azerbaijan this past summer. She worked with the University’s Center for Fellowship and Scholarship Advising (CFSA) to prepare her application.
Below, she reflects on her experience abroad and how it has influenced her.