Stacy Pearsall ’05, an alumna of the Newhouse School’s Military Visual Journalism Program was the recipient of a service dog during a special segment on NBC’s Today Show. 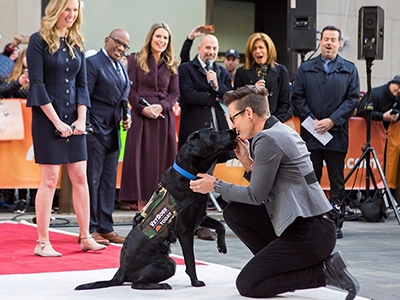 Stacy Pearsall meets her service dog, Charlie, on the set of the “Today Show” on Thursday, Nov. 9.

Pearsall, who visited campus earlier this week for her Veterans Portrait Project, was a guest on NBC’s “Today Show” Thursday, Nov. 9, where she met her new service dog, Charlie, a black Labrador retriever.

Charlie has been a frequent guest on the Today Show as part of the “Puppy with a Purpose” segment. For 14 months, “Today Show” viewers have followed along with Charlie’s development as a service dog trained for the needs of a military veteran. He first appeared on the show as an 8-week-old puppy and became a regular on the show, meeting numerous guests and celebrities.

The Today Show featured Pearsall’s military career in a segment where she described her military commitment as a family tradition that stretched back to the Civil War. Pearsall got her start as an Air Force photographer at the age of 17. She traveled to more than 41 countries and, during three combat tours, earned the Bronze Star and Air Force Commendation with Valor for combat actions in Iraq.

Due to an attack on her convoy in Iraq, Pearsall lives with the effects of that attack with traumatic brain injury, migraines, seizures and nerve pain, according to the “Today Show.”

Pearsall says she has been waiting for a service dog for two years. When Charlie and Pearsall met, he came right to her and she gave him a treat and broke out into a huge smile.

She told the hosts of the “Today Show” that Charlie will help her cope with pain and be her partner on the road for the Veterans Portrait Project.

Pearsall, spent two days this week in the lobby of Newhouse 2 taking photos of veterans for her project. She founded it in 2008 as a way to preserve the faces and stories of veterans from around the world, and to honor and thank them. Pearsall says she started the project as “an emotionally cathartic, physically healing tool,” and as a way to extend her service when she could no longer serve in uniform.

She twice earned the National Press Photographers Association’s Military Photographer of the Year award and is also the recipient of several other awards, including recognition by the White House as a “Champion of Change.”

Charlie was trained by America’s VetDogs, a nonprofit organization that trains dogs to support veterans and first responders during combat, both physically and emotionally.