Dympna Callaghan, the William L. Safire Professor of Modern Letters and professor of English in the College of Arts and Sciences, has been named a University Professor by Vice Chancellor and Provost Michele Wheatly. The distinction, approved by Chancellor Syverud and the Board of Trustees, recognizes faculty for extraordinary scholarly achievement as judged by their peers nationally and internationally. 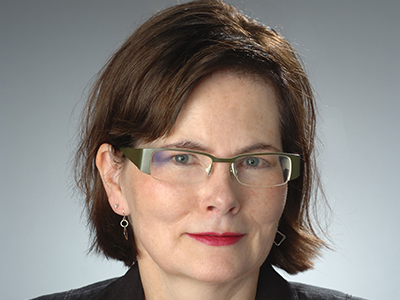 “Dympna is highly deserving of this distinction,” says Provost Wheatly. “Her research in the area of early modern literature is widely acclaimed by scholars around the world. And she excels as a mentor and research leader to both undergraduates and graduate students. She also has been a leader in the humanities community here at Syracuse, and her efforts have made us a better university.”

As University Professor, Callaghan will assist University leaders with implementing and championing the University-level Academic Strategic Plan, with a particular focus on further incorporating the humanities disciplines into the major themes of the plan.

“I am truly thrilled and honored to have been awarded a University professorship,” Callaghan says. “Working with Provost Wheatly and her team to realize the aspirations detailed in the University Academic Strategic Plan is indeed an exciting prospect.”

A member of Syracuse University’s faculty for 28 years, Callaghan has compiled an extensive body of scholarship relating to Renaissance poetry and drama, women’s writing and feminist theory. She has written or edited more than a dozen books, including, most recently, “Hamlet: Language and Writing”; “Who Was William Shakespeare? An Introduction to the Life and Works”; “The Feminist Companion to Shakespeare, Second Edition”; and “Romeo and Juliet: Texts and Contexts, Second Edition.”

Callaghan has held numerous prestigious fellowships, including an Andrew W. Mellon yearlong fellowship and a long-term fellowship at the Getty Research Institute. She has been a visiting fellow at Hughes Hall and Clare Hall, both at Cambridge University, and is now a life member of Clare Hall. She held her most recent fellowship in Italy at the Bogliasco Arts and Humanities Center.

In addition, Callaghan has mentored students on scholarship focusing on such areas as 18th century depictions of Ireland and the Irish; sexual violation as a theme in classical and early modern poetry; women, theater and nascent capitalism in the interregnum; race and colonialism in early modern drama; illiteracy and the early modern stage; and women and magic.

Over the past year, Callaghan chaired the College of Arts and Sciences’ strategic planning steering committee. She also served a one-year appointment in 2013 as interim director of the University’s Humanities Center.

The University Professor designation is a four-year, renewable appointment.