Urban Video Project presents an exhibition and special event featuring the work of eminent filmmaker Kevin Jerome Everson. The short pieces “Grand Finale” (2015) and “Act One: Betty and the Candle” (2010) will be on view at UVP’s outdoor architectural projection venue on the Everson Museum facade Nov. 9-Dec. 23. 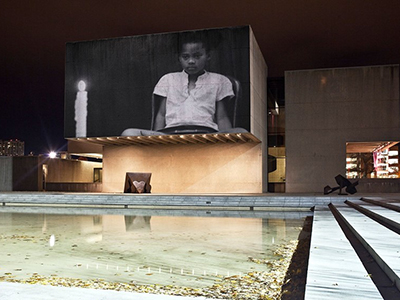 A still from one of Kevin Jerome Everson’s films

The filmmaker will be present for a special screening (Syracuse premiere) Nov. 16 at 6:30 p.m. in the Everson’s Hosmer Auditorium of the related feature-length film “Erie” (2010), which was created during a residency at Hallwalls in Buffalo. Poetic and contemplative, “Erie” consists of a series of single-take 16mm shots in and around communities near Lake Erie, including Niagara Falls, Buffalo, Cleveland and the artist’s hometown of Mansfield, Ohio. The scenes relate to Black migration from the South to the North, realities affecting workers and factories in the automobile industry; contemporary conditions, theater, and famous art objects.

The screening will be followed by a Q&A with the audience and reception.

Both the event and exhibition are free and open to the public.

Everson says of his practice, “With a sense of place and historical research, my films combine scripted and documentary elements with rich elements of formalism. The subject matter is the gestures or tasks caused by certain conditions in the lives of working class African Americans and other people of African descent.”

Everson’s films have received wide acclaim and have been exhibited internationally at film festivals including Sundance, Toronto, Venice, Rotterdam, Berlin, New York, Ann Arbor, AFI and Oberhausen; and at cinemas, galleries and museums including the Museum of Modern Art and the Whitney Museum of American Art, New York; Whitechapel in London and REDCAT, Los Angeles.