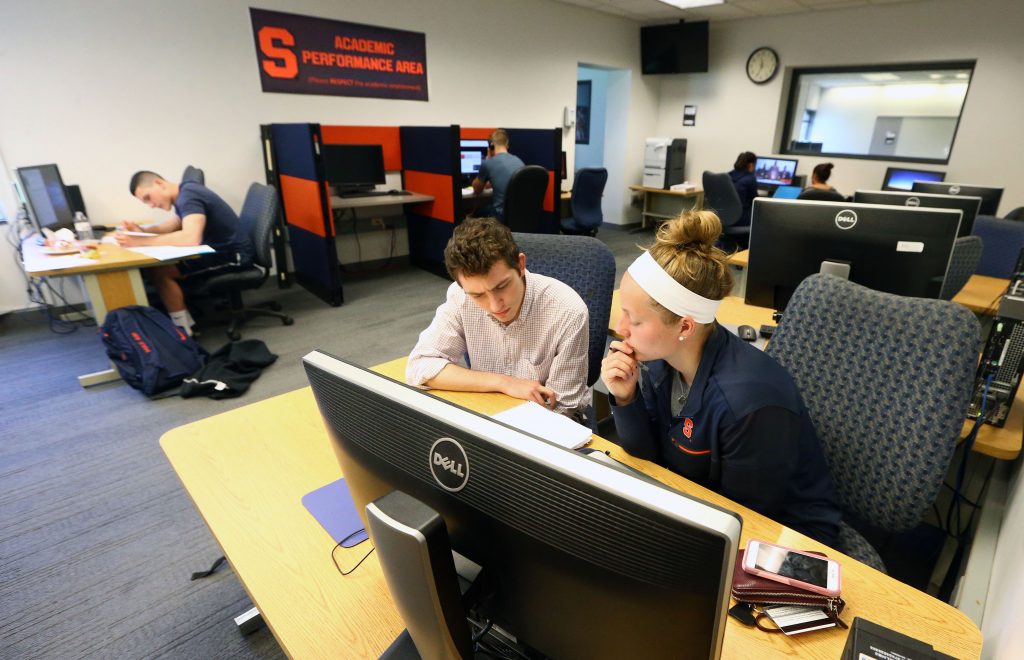 For the 2016-17 academic year, student-athletes achieved a Graduation Success Rate of 91—the highest-ever for the University since the NCAA started measuring the rate in 2004.

“This is evidence that Syracuse University places an extremely high value on academics and the success of its students,” says Rick Burton, the David B. Falk Professor of Sport Management in Falk College and Syracuse University’s Faculty Athletics Representative to the ACC and NCAA. “These scores indicate there is an ongoing commitment to excellence in how we approach academic rigor and the importance of academics at Syracuse.”

The well-deserved numbers underscore the hard work of the student-athletes in pursuing their goals in and out of the classroom, and it also represents the University’s commitment to supporting them in their endeavors, says Tommy Powell, assistant provost for student-athlete academic development.

“Five years ago the University made a significant investment in academic support services for student-athletes and we are beginning to see the benefits through great graduation rates,” Powell says. “These rates represent actual student-athletes who are now proud alumni of this great University. This is a total University effort, including the hard work of our student-athletes, coaches, faculty, staff and University administration.”

Burton recognizes the importance of the academic support staff at the Stevenson Educational Center, who work closely with the students’ academic advisors to ensure they are reaching their degree and academic goals.

“A great number of people in the Stevenson Center work very hard to ensure we provide the best possible academic support to our student-athletes,” Burton says.

The NCAA instituted the GSR to more accurately reflect the mobility of college students as compared to the Federal Graduation Rate. The federal rate counts any student who leaves a school as an academic failure, whether or not the student enrolls at another school. The federal rate also does not consider students who enter as transfer students.

The GSR for student-athletes at Syracuse has been on the increase over the past several years and came in at 90 for the 2015-16 academic year. Powell says he expects the rate to continue to inch up. “All indications are that this rates will continue in a positive direction,” Powell says.

The release of the GSR and the Federal Graduation Rate follow last spring’s announcement of the impressive success of student-athletes as reflected in the University’s Academic Progress Rate.