Two Syracuse University students have been named finalists for three of the United States’ most prestigious nationally competitive scholarship awards: the Marshall Scholarship, the Mitchell Scholarship and the Rhodes Scholarship. 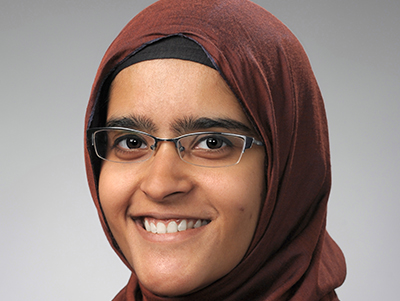 Abdali studies Arab American and Muslim American literature; she hopes to gain a transatlantic context for her work. She has applied to use the Marshall to do a one-year master’s degree program in postcolonial studies at the University of Kent in the United Kingdom, followed by a one-year master’s degree program in comparative literature at the School of Oriental and African Studies (SOAS) at the University of London.

Abdali is also a member of the Renée Crown University Honors Program and a 2017-18 Remembrance Scholar. This past summer, she was selected and participated in the selective MICHHERS program at the University of Michigan-Ann Arbor for students who plan to pursue a Ph.D. in the humanities.

MacPherson studies the grassroots organizations of Congolese refugees; he seeks to gain a deeper understanding of the role of religion in this community, and in the relationship between religion and identity and conflict more generally. He has proposed to use the Mitchell Scholarship to enroll in a one-year master’s of philosophy program in intercultural theology and interreligious studies at Trinity College, Dublin,. There, he would create multimedia scholarship—including documentary film—as he investigates his research questions. 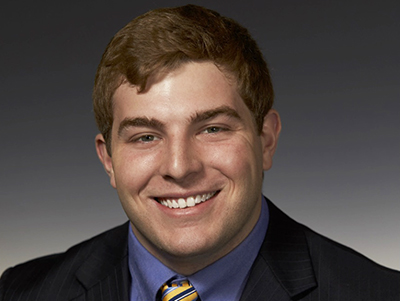 MacPherson received a bachelor’s degree from Syracuse in 2016 in international relations from the College of Arts and Sciences and the Maxwell School of Citizenship and Public Affairs and in television, radio and film from the S.I. Newhouse School of Public Communications. He was a member of the Renée Crown University Honors Program and a 2015-16 Remembrance Scholar. MacPherson was also a member of the football team and is an accomplished athlete.

Both Abdali and MacPherson worked with the Center for Fellowship and Scholarship Advising (CFSA) as they planned and honed their applications to these prestigious awards. “Cameron and Zainab are truly outstanding students with impressive records of service to their communities and clear plans for graduate study,” says Jolynn Parker, director of CFSA. “The fact that they were selected as finalists for these extremely competitive awards is a testament to their talents and to the quality of their Syracuse University educations.” CFSA has arranged a series of “mock interviews” for Abdali and MacPherson to help prepare them for their interviews with the Marshall and Mitchell selectors in mid-November. “We’re extremely grateful to campus faculty and administrators who generously give their time to help prepare our finalists,” says Parker.

The Marshall Scholarships finances young Americans of high ability to study for a graduate degree in the United Kingdom. Up to 40 scholars are selected each year to study at the graduate level at a United Kingdom institution in any field of study. As future leaders with a lasting understanding of British society, Marshall Scholars strengthen the enduring relationship between the British and American peoples, and their governments and institutions. Marshall Scholars are talented, independent and wide-ranging, and their time as scholars enhances their intellectual and personal growth.

The Sen. George J. Mitchell Scholarship Program is an initiative of the U.S.-Ireland Alliance. The scholarship is a nationally competitive post-graduate award for 12 Mitchell Scholars to pursue one year of study in Ireland and Northern Ireland. The scholarship is designed to introduce and connect future American leaders to the island of Ireland and recognize and foster intellectual achievement, leadership, and a commitment to community and public service

The Rhodes Scholarships are awarded to 32 young students from the United States each year. Rhodes Scholars are chosen not only for their outstanding scholarly achievements, but for their character, commitment to others and to the common good, and for their potential for leadership in whatever domains their careers may lead. The scholarship provides full financial support for Rhodes Scholars to pursue a degree or degrees at the University of Oxford in the United Kingdom.