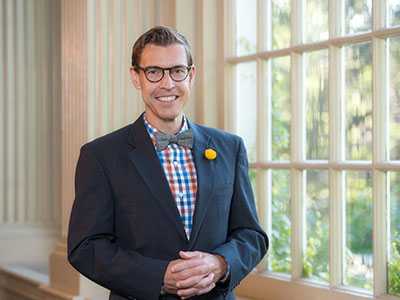 About two weeks after starting his new role as dean of Hendricks Chapel, the Rev. Brian E. Konkol was walking to a meeting. He ran into Leah Fein, Hillel’s campus rabbi. The two started walking together; about a minute later they encountered Amir Duric, the Muslim chaplain, heading the same way.

Konkol admits his first thought was about a pastor, a rabbi and an imam walking into a bar–the premise for endless jokes. “I actually wanted us to find the nearest watering hole and walk in, just to have some fun with it,” he shares. They didn’t, but he also quickly recognized the metaphor created by the clergy trio.

“That walk symbolizes the mission of Hendricks Chapel,” he says. “We accompany. We journey alongside others, recognizing and embracing our diversity, to educate and bring us all a bit closer to the dream of a common good.”

Konkol, a native of Amherst Junction, Wisconsin, is an ordained minister of the Evangelical Lutheran Church in America. He previously served as chaplain of, and taught in, the Peace, Justice and Conflict Studies program at Gustavus Adolphus College in St. Peter, Minnesota. He also ministered at a Wisconsin church and in Guyana and South Africa.

He will be installed as the seventh Hendricks dean at 4 p.m., Tuesday, Nov. 7, at the chapel. The ceremony is open to the public and all are invited. Ahead of that celebration, Konkol discussed his hopes for Hendricks. Here are excerpts of that conversation, edited for length and clarity.