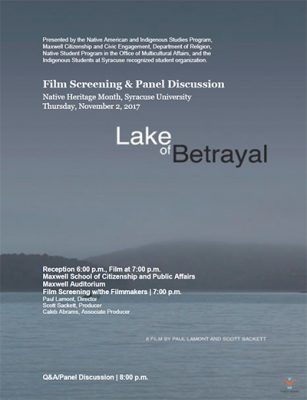 As part of Native Heritage Month, on Thursday, Nov. 2, the documentary film “Lake of Betrayal: The Story of Kinzua Dam” will be screened in Maxwell Auditorium. A reception will begin at 6 p.m. The film screening will begin at 7 p.m. and include the film’s director Paul Lamont, producer Scott Sackett and associate producer Caleb Abrams. A panel discussion will follow the screening at 8 p.m.

“Lake of Betrayal,” which is available for broadcast on PBS stations nationwide beginning in November, explores the effects of the construction of the Kinzua Dam on the Allegheny River in Pennsylvania on the Seneca Nation.