Crimes committed against civilians during war can be especially heinous, but when those crimes are committed with planned intent to destroy an ethnic or religious community, international law applies the unique label of “genocide.” It is not a charge used lightly by the international community, although in recent times it has been applied to crimes committed during the Bosnian War (1992-1995) and Rwandan Civil War (1994). 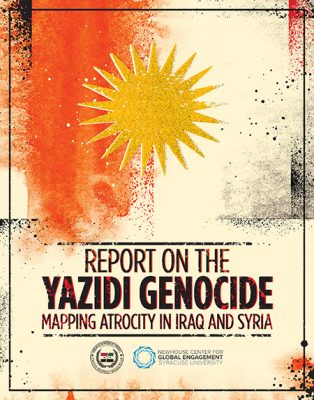 Now, a white paper published by the Syracuse University College of Law-based Syrian Accountability Project (SAP) asserts that war crimes and crimes against humanity committed in 2014 against the Yazidi community by the Islamic State in Iraq and Syria (ISIS) also should be considered genocide. The report documents crimes perpetrated against the Yazidi community and calls on the international community to take “proper care of the living proof” of the Yazidi genocide and to begin the “strategic preservation” of forensic evidence that could be used in an international court.

As with past SAP special reports, the “Report on the Yazidi Genocide: Mapping Atrocity in Iraq and Syria” draws on the project’s six-year-long effort to document war crimes and crimes against humanity committed by all sides during the Syrian Civil War and associated conflicts. Working with open-source materials from available media and contacts within the region, SAP students are responsible for maintaining the project’s two main deliverables, the conflict narrative and the crime base matrix. The former is a legally relevant historical narrative of the conflict, while the matrix’s intent is to provide case facts of representative crimes (as well as the relevant international or national legal standard for each crime) to guide a future prosecution team. In this way, SAP both advocates on behalf of victims and provides legal analysis to aid in the eventual administration of postconflict justice.

The “Report on the Yazidi Genocide” has been sent to SAP’s international clients, including the International Criminal Court, the United Nations, the U.S. Congress and leading human rights organizations. The report also joins related documents requested of SAP by London-based law firm Doughty Street Chambers and barrister Amal Clooney, who acts as legal counsel to Yazidi victims of ISIS’ crimes and to Yazda, a nongovernmental organization that supports the Yazidi community.

“The Syrian Accountability Project has become a relied-upon legal investigatory tool for the delivery of justice for the people of Syria and the Levant,” says College of Law Professor of Practice David M. Crane, who supervises the project. “The capacity of a College of Law student with a focused, properly supervised plan is unlimited.”

The Yazidis—an ethno-religious group of between 500,000 and 1.2 million people living primarily in Northern Iraq—are Kurdish-speaking and follow their own syncretic religion that combines aspects of Zoroastrianism, Islam, Christianity and Judaism. The “Report on the Yazidi Genocide” alleges that, beginning in summer 2014, the group was targeted by ISIS and its campaign to “purify” the region of non-Islamist influences. The report details what it calls “grim incidences” of “incomparable brutality” during this campaign. More than 2,800 Yazidis were killed in this short time; 4,600 community members were abducted; 1,950 children were victimized; and towns and villages were blockaded or emptied of their residents. Women were kidnapped, raped, forced to abort fetuses and sold into sexual slavery, while in a particularly abhorrent episode in August 2014, many children died of exposure on Mount Sinjar, where up to 50,000 Yazidis were seeking refuge.

“This has been a harder project to track than crimes committed in Syria during the civil war,” says Joseph Railey, SAP executive director and third-year law student. “Narratives about sexual violence as a war crime are difficult to collect, and whole villages have disappeared, so those people cannot tell their stories. Nevertheless, this white paper helps clarify for our clients what kinds of information the Syrian Accountability Project has recorded beyond the case facts stemming specifically from the Syrian Civil War.”

While the report cross-references individual representative crimes with the articles of the Geneva Conventions, Rome Statute and/or Iraqi Penal Code that they violate, it is the systematic nature of the crimes, along with ISIS’ stated intent to convert Yazidis to Islam, that raises the atrocities collectively to genocide. “The stories underlying these crimes provide the evidentiary support necessary to demonstrate that ISIS executed a systemic plan to destroy, in whole or in part, the Yazidi people,” the report states. “ISIS soldiers regularly demonstrated a specific intent to destroy the Yazidi people through their ideology and unabashed assertions for eliminating the Yazidi community.”

The report recognizes that much of the circumstantial evidence and news reports that SAP has collected are not legally sufficient to support a declaration of genocide, but it hopes that publishing these narratives will spur the international community to make an effort to preserve physical evidence of crimes. “Bringing ISIS to justice for genocide against the Yazidi community, at the domestic or the international level, will depend on the strategic preservation of forensic evidence,” the report concludes.

“What we are asking is that more recording of actual criminal evidence be done by the international community,” asserts Railey. “We are essentially saying, what happened was horrific, yet few people are talking about it. So we want to help draw people’s attention to the Yazidi situation and start a dialogue about what can be done.”