Brian Konkol to be Installed as Seventh Dean of Hendricks Chapel on Nov. 7 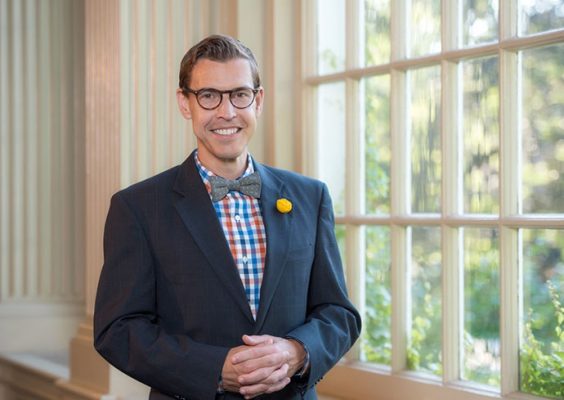 The Rev. Brian E. Konkol will be installed as the seventh dean of Hendricks Chapel in a ceremony on Tuesday, Nov. 7, at 4 p.m. in Hendricks Chapel. The University community is invited and encouraged to attend.

A community tailgate, open to all, will precede the installation from 11 a.m. to 1 p.m. on the Kenneth A. Shaw Quadrangle.

Konkol assumed his role as dean on July 15. He came to Syracuse from Gustavus Adolphus College in St. Peter, Minnesota, where he served as chaplain of the college since 2013. In that role, he provided strategic leadership to the Office of the Chaplains and was a faculty member of the Peace, Justice and Conflict Studies program. He also served as the faculty liaison to the men’s basketball team.

Since coming to Syracuse, Konkol has worked to strengthen the role of the chapel as the spiritual heart of the campus and a model for diversity and inclusion of philosophies and religions. He is reviewing and instituting recommendations from the Hendricks Chapel Study Committee to enhance the chapel’s role and impact in the community.

Konkol’s impact is already being felt across the campus community. In addition to spearheading efforts surrounding hurricane outreach relief, he was appointed to the Universitywide Council on Diversity and Inclusion and recently spoke at the Carrier Dome for a community worship service. He served as guest anchor for the weekly ‘Cuse Cast, was featured by The Daily Orange and has presented on various topics in partnership with the athletics department, residence life, Fraternity and Sorority Affairs, Orientation Leaders, Orange Seeds, Mental Wellness Peer Educators and the Program for the Advancement of Research on Conflict and Collaboration (PARCC), among others.

In addition to his presence outside the walls of the chapel, Konkol’s influence within Hendricks is immediately observable. At the beginning of the fall semester, he instituted the weekly Hendricks Chapel Dean’s Convocation. The idea of the convocation emerged from the Syracuse campus community and is intended to be a weekly gathering place for all people that features a diversity of religious, spiritual and philosophical perspectives. The convocation highlights the Hendricks Chapel Choir, University Organist and various musical guests, and hundreds of people from across the campus and wider community now regularly attend the weekly gatherings.

Konkol, an ordained minister of the Evangelical Lutheran Church in America (ELCA), has a diverse and global background of service, ministry and teaching. Prior to his appointment to Gustavus Adolphus College, he served as co-pastor of Lake Edge Lutheran Church in Madison, Wisconsin, with responsibilities surrounding multicultural engagement and public advocacy.

From 2008-2012, he served in South Africa as country coordinator of the Young Adults in Global Mission program of the ELCA. He also assisted in parish ministry alongside isiZulu-speaking congregations of the Evangelical Lutheran Church in Southern Africa, lectured at the Lutheran Theological Institute and participated with the World Council of Churches and Lutheran World Federation in the Conference of the Parties to the United Nations Framework Convention on Climate Change.

From 2003-2007, Konkol interned with and later served a parish with the Evangelical Lutheran Church in Guyana, where he also lectured at the Lutheran Lay Academy and co-hosted the nationally televised broadcast “Word for the World.” He served on a variety of community organizing committees, many of which focused on ecumenical and interfaith cooperation, poverty, children and youth development, and ecological sustainability.

Konkol is originally from Amherst Junction, Wisconsin. He is a graduate of Amherst High School and earned a bachelor of science degree in criminal justice from Viterbo University, La Crosse, Wisconsin. He earned a master of divinity degree from Luther Seminary in St. Paul, Minnesota, and master of theology and doctor of philosophy degrees in the School of Religion, Philosophy, and Classics at the University of KwaZulu-Natal, South Africa.

He is a sought-after preacher, frequent presenter at conferences and a prolific writer. His book, “Mission as Accompaniment: A Response to Mechanistic Dehumanization” was released by Fortress Press in June.

Konkol and his wife, Kristen (Tews) Konkol, are the parents of a son, Khaya, and a daughter, Tobi.