Light Work has announced the opening of “Anonymous,” a solo exhibition by artist John Edmonds. The exhibition will be on view in the Kathleen O. Ellis Gallery at Light Work from Nov. 1-Dec. 14. There will be an opening reception on Thursday, Nov. 30, from 5-7 p.m. with an artist talk at 6-p.m. This event is free and open to the public. Refreshments will be served. 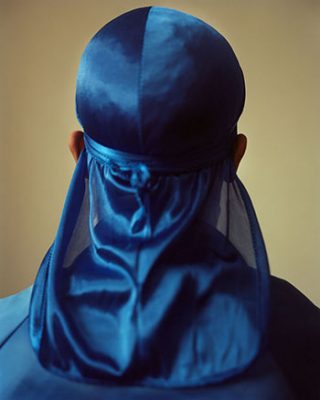 “All the work that I make is from a very personal place,” says Edmonds of his process. “It starts with me.” In “Anonymous,” Edmonds combines two distinct series of portraits, both of which conceal the identities of their subjects. We know these men. Though faces are obscured, some of these images, taken during Edmonds’ residency at Light Work are of men from Syracuse, New York. The photographs comprise striking formal studies of individuals wearing hoods on the street, photographed from behind. Edmonds further embeds himself in this work by photographing his subjects wearing his own hoodies and jackets. With little visual clues to guide us, we may only learn from the artist that the obscured individuals in fact vary in race, gender and age. Another interesting aspect of Edmond’s pictures is that despite the anonymity, they are photographically descript. The portraits are made in the bright daylight and the clarity and detail of the fabric offer a sense of closeness, implicating the viewer with the feeling of approaching a stranger from behind. While acknowledging that his work begins from a personal place, Edmonds emphasizes the necessity of the viewer in the completion of an image.

For Edmonds, the personal is political: “I hope my work can reflect the reality of this country right now,” he says. Indeed, we can quickly read his suite of images as a statement on the unjust death of Trayvon Martin and how individuals of color continue to face issues of racism, safety and injustice in systemic ways. Through an emphasis on form and repetition, Edmonds’ work engages viewers in conversations of visibility in society.

Edmonds is an artist working in photography whose practice includes fabric, video and text. He received his M.F.A. in photography from Yale University School of Art and his B.F.A. in photography at the Corcoran School of Arts and Design. He is most recognized for projects where he focused on the performative gestures and self-fashioning of young black men on the streets of America, as well as his evocative portraits of lovers, close friends and strangers. He has held residencies at the Center of Photography at Woodstock, Woodstock, New York; The Skowhegan School of Painting & Sculpture, Skowhegan, Maine; FABRICA: The United Colors of Benneton’s Research Center, Treviso, Italy; and Light Work, Syracuse, New York. Edmonds lives and works in Brooklyn.