Alumnus Honored by Son with Creation of Endowed Scholarship Fund 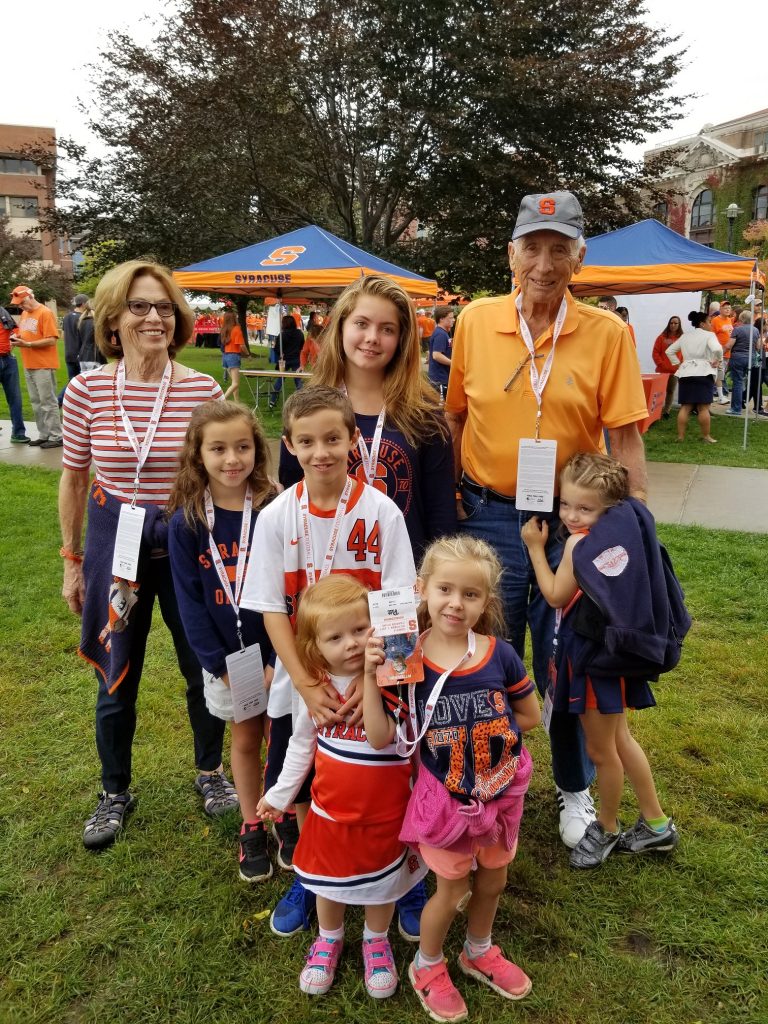 An alumnus is being honored by his son who has established a scholarship in his father’s name to support student-athletes pursuing graduate work in education or service-based fields.

The $1.5 million endowment is being provided by Brian Grossman in honor of his father, Dr. Murray Grossman ’43, G’45, who served as medical consultant to Syracuse University Athletics for 25 years. The Murray A. Grossman M.D., Endowed Graduate Scholarship Program Fund will assist former Syracuse University student-athletes with financial need who are pursuing graduate studies in the School of Education or the Falk College of Sport and Human Dynamics.

When deciding on the scholarship criteria, the younger Grossman felt it was important that it represent something that was true to his father.

“My dad has given his life to Syracuse and the University in the sense that his entire life has been intertwined with the University,” Brian Grossman says. “He has always loved learning, teaching and intercollegiate sports. So first and foremost this is meant to honor his lifetime of commitment to the University. Second, I wanted to emphasize his passion for teaching.” He also wanted to provide a gift to the community that will have an impact.

Dr. Grossman was surprised and overwhelmed when he found out about the scholarship on a visit to his son’s home in September. “My wife, Kathryn, and I flew out to California to spend a week with our grandchildren and that’s when Brian and his wife, Beth, told us about it,” he says. “I was quite flattered and humbled by it.”

The goal of funding a scholarship was to meet a defined need as identified by the University and the athletics department. “This will fund athletes who want to go into careers in either education or service work and get a master’s degree,” Dr. Grossman says. “It’s a very real need.”

Deep connection to the University

Dr. Grossman fondly remembers his years of schooling at Syracuse and the intensive training in the medical school. “I went to classes from 9 to 5, with labs every afternoon. I was very busy but I enjoyed those years. I’ve always liked school,” he says.

A walk-on member of the basketball team his freshman year, Dr. Grossman tried out his sophomore year but had to make a decision about playing ball. “I had labs every day till 5. I realized my career wasn’t in basketball; I wasn’t that good at it,” he says. “I made the decision to go to my labs and become a doctor.”

After graduating, Dr. Grossman served two years in the U.S. Navy before returning to Central New York, where for many years he practiced internal medicine and cardiology and taught at the SUNY Health Science Center. He was president of the former Crouse Irving Hospital from 1966-68 and was the first president of the combined Crouse Irving Memorial Hospital, now Crouse Hospital.

During his career, Dr. Grossman was an American Heart research fellow for a year at the University of Utah Medical School. When he returned to Syracuse, he was offered a full professorship at SUNY Health Science Center, retiring as professor emeritus in 1992.

He found great rewards in teaching. “As a teacher, you’re around a lot of young, active minds, and it’s great to be dealing with young people who sometimes accept and sometimes challenge what you say—and it’s fun,” he says. “There’s a lot of joy meeting former students and residents and having them recount the times they were in training.”

Dr. Grossman, who was also a board member of the United Way of Central New York, also served as a consultant to the Federal Aviation Administration and was on the advisory board for Syracuse University Health Services. For his service to Syracuse Athletics as medical consultant, Dr. Grossman received an honorary LetterWinner of Distinction in 2016.

Brian, co-managing partner of Partner Fund Management, a San Francisco-based firm focused on health care and technology investments, looks back on his father’s life and career as one that has influenced and enhanced the community he’s lived in—something he hopes the scholarship will do as well. “I’ve had this longstanding view that what was good for Syracuse University is good for the community, more so than ever before,” Brian says.

Brian notes that pursuing a graduate degree in education or service work isn’t always an easy decision. “It’s financially difficult to justify making the investment in a graduate degree, but our country, our community needs great teachers and civic leaders,” he says, adding that he hopes that the students remain in the Syracuse area once they graduate.

Dr. Grossman, who turns 95 today, Oct. 30, and his wife also have three daughters Sarah G’07 (College of Law/Maxwell School of Citizenship and Public Affairs), Liz and Jacky, along with grandchildren, and are the foundation for a close-knit family. The couple continues to be active members of the Syracuse University community; they are longtime supporters of the University, visit campus and attend athletic events.

Giving back is something Dr. Grossman and his wife always reinforced to their children. “We always preached to the kids—God gave you a number of gifts and you have to repay them to others,” he says.