Share
Chancellor's Task Force on Sexual and Relationship ViolenceIt's On Us 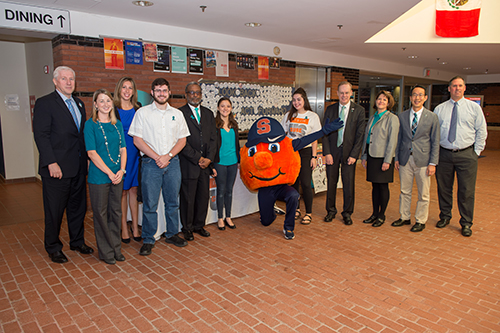 Members of the Chancellor’s Task Force on Sexual and Relationship Violence pose with Chancellor Syverud, fourth from right, Otto the Orange and Emily Durand, next to Otto, on Teal Tuesday.

The It’s On Us campus student ambassadors have planned a number of events, programs and awareness activities for It’s On Us Week of Action from Oct. 23- 27. The It’s On Us national campaign encourages every member of the community to take the pledge and do their part to end sexual and relationship violence.

Emily Durand, a junior in the College of Arts and Sciences and School of Education, is an It’s On Us National Student Advisory Committee member for the northeast region and one of the SU campus organizers for It’s On Us. We asked her four questions to learn more about It’s On Us and the Week of Action.