Newhouse School and Maxwell School alumnus Jeff Glor ’97 has been named anchor of the CBS Evening News. The announcement was made Wednesday by CBS News President David Rhodes. 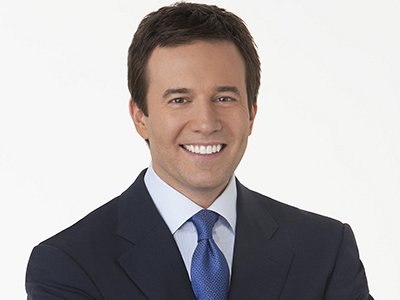 “Jeff is a thoughtful, probing journalist with the versatility to anchor in any circumstance—from daily reporting to the most significant events of our time,” Rhodes said in a statement. “In his more than 10 years at CBS News, Jeff has earned the trust of viewers and his colleagues. He represents the best journalistic values and traditions that will carry the Evening News into a digital future.”

Glor joined CBS News in 2007 as a correspondent, and has traveled extensively to report on some of the biggest domestic and international stories of the past 15 years. He won an Emmy Award in 2011 for a “CBS Sunday Morning” story.

Before joining CBS News, Glor was the weekend evening news anchor and a weekday reporter for WHDH-TV Boston. He began his journalism career at Syracuse’s WSTM-TV, and was named “Best Male News Anchor” by the Syracuse New Times. He earned a degree in broadcast and digital journalism program at the Newhouse School and in economics at the Maxwell School.