Award-winning journalist Nikole Hannah-Jones will visit the S.I. Newhouse School of Public Communications Nov. 2. She will present “The Work We Have Before Us: Confronting America’s Racial Divide through Reporting on Education” at 7:30 p.m. in the Joyce Hergenhan Auditorium, Newhouse 3. Follow on Twitter at #JournalismMatters. 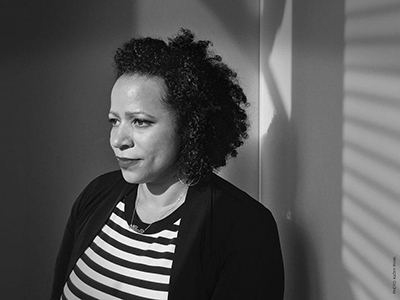 Hannah-Jones is an investigative reporter, writing on modern-day civil rights for The New York Times Magazine. Her widely read articles on segregated housing and schools, as well as her deeply personal reports on the Black experience in America, expose how racial inequality is maintained through official policy. They also offer a compelling case for greater equity.

Her article, “Choosing a School for My Daughter in a Segregated City,” won a National Magazine Award earlier this year. She has also been honored with a Peabody and a George Polk Award for her work on racism in housing and education. Last month, the John D. and Catherine T. MacArthur Foundation named Hannah-Jones as one of 24 recipients of its annual fellowship, commonly referred to as the “genius grant.”

In 2016, she helped found the Ida B. Wells Society for Investigative Reporting, a news trade organization dedicated to increasing the ranks of investigative reporters of color. She is currently working on a book about school segregation titled, “The Problem We all Live With.”

Hannah-Jones got hooked on journalism when she joined her high school newspaper and began writing about students like her, who were bused across town as part of a voluntary school desegregation program.

Her heroes are the race beat reporters, such as Ida B. Wells, Ethel Payne, Simeon Booker and Claude Sitton, whose fearless coverage helped move this nation closer to its promise.

Prior to joining The New York Times, Hannah-Jones worked as an investigative reporter at ProPublica in New York City, where she spent three years chronicling the way official policy created and maintains segregation in housing and schools. Before that, she reported for the largest daily newspaper in the Pacific Northwest, The Oregonian in Portland, Oregon, where she covered numerous  beats, including demographics, the census and county government.

Hannah-Jones started her journalism career covering the majority-black Durham Public Schools for The News & Observer in Raleigh, North Carolina. During her three years there, she wrote extensively on issues of race, class, school resegregation and equity.

For more information about her talk, contact Kristen Northrop at 315.443.7358 or kmnorthr@syr.edu.